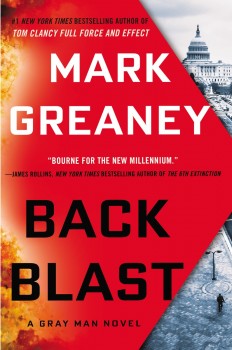 Thriller readers may best recognize Mark Greaney’s name in conjunction with that of the late Tom Clancy—which by Greaney’s admission, isn’t a bad association. In an all-star roster of legendary thriller writers, Clancy certainly ranks near the top. But long before Greaney started co-writing, he entered the publishing world with Gray Man, the first book in what became a series featuring Court Gentry, an ex-CIA hitman on the run from the very organization that hired him.

Unlike Robert Ludlum’s “Jason Bourne”, though, Gentry doesn’t know what he’s done to piss off his boss. In BACK BLAST, the fifth, and arguably most explosive book in the series, Greaney brings Gentry home to the U.S. in a quest to answer the question for which he—and a loyal legion of readers—have waited nearly seven years for: why does the CIA want Gentry dead?

“I realized I had teased it long enough,” Greaney says, noting that what began as a small subplot in Gray Man continued to expand, bit by bit in each book, culminating in what he now hopes is a satisfying resolution to the mystery—while still opening the door for Gentry’s future. “I was a reader long before I became a professional writer, and I always look at everything from a reader’s point of view. I felt that this was the right time, and I wanted to give my fans that pay off.”

It doesn’t come without a price. Greaney dug deep for BACK BLAST, pushing through months of self-doubt, wondering whether the book would resonate with fans, or if he should scrap the whole thing and start over.

Fortunately, time didn’t allow for any of that insecurity nonsense. As a two-books-a-year author—one each for the Gray Man and Jack Ryan series’—Greaney had no choice but to keep writing (and writing), eventually delivering what he loosely describes as a marriage of the original Die Hard movie and All The President’s Men.

Both comparisons ring true on some level, but with Greaney’s individual stamp of authenticity, of course—most prominently, his uncanny ability to write thrilling action that doesn’t feel trite or overdone. Even for a seasoned writer, it’s not as easy as Greaney makes it look.

“It’s getting harder as time goes on,” he admits. “I’ve already picked all the low hanging fruit. So I have to keep learning more and more new stuff. I’m always training with firearms, learning about new weapons, always cognizant of what I’ve done in the past.”

As with the previous four books in the series, Greaney keeps the pacing tight—even for a novel that weighs in at just over 500 pages—a skill he claims is about 70 percent instinct and the rest trial and error.

“Pacing is something that you only know is off when you’ve made a mistake,” he says. “It’s a construction project, really. It’s tough for newer writers to recognize when they have too much backstory, but it’s my job to make the reader care about the characters within the context of the movement and action.”

Similarly, it’s the author’s responsibility to keep the characters fresh, whether it’s a first meeting with the reader, or the fifth book in the series. Greaney says the key is knowing your protagonist—what motivates them, what scares them, how they will react to the elements within the plot. Because, he says, your readers really do know your character.

Greaney witnessed this first hand when he caused a mini scandal after giving Gentry an addiction to pain medication as a result of a particularly intense plot point in one of the previous Gray Man books. Despite taking some backlash from disgruntled fans, it’s a decision he continues to stand by today.

“I know it’s impossible to keep readers happy throughout the series,” he says. The character, along with the plots, must evolve, and Greaney says he never intended to be the kind of author that simply “phones it in.”

There’s certainly no chance of anyone thinking that after reading BACK BLAST, the first of the Gray Man books to receive hardcover treatment. Amid the gunfire and explosives is the story of a man who has had to make unthinkable decisions in the name of survival—the guilt is palpable. And real.

In fact, it’s that reality, even when the plot seems outrageous and unrealistic, that Greaney keeps in focus at all times. Whether he’s weapons training, Google researching, or travelling to foreign countries avoiding well-placed bugs like a real-life spy (no joke!), Greaney strives for authenticity—at least the factors that are within his control.

While many of his fans know the Gray Man series has been tapped for film development, Greaney says their loyalty may be somewhat tested if the project eventually does make it to the big screen. In a move that’s become increasingly common in Hollywood right now, Sony is rejigging the script to accommodate an A-list star that has expressed serious interest in the role—Charlize Theron.

Perhaps ironic since Greaney kind of envisioned someone more like Tom Hardy.

“The truth is, unless you’re Stephen King, the producers can do whatever they want with the source material,” he says, admitting that while a part of him isn’t fully able to distance himself from the project, he’s keen to see the Gray Man series on screen—and as far as leading ladies go, Theron is a pretty solid choice. “I’m sure there will be fans that won’t approve, but I’m a huge fan of hers and a huge fan of females in action movies. I’m excited to see what happens.” 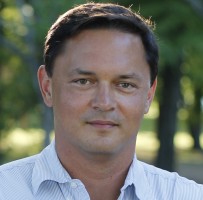 Mark Greaney has a degree in international relations and political science. In his research for the Gray Man novels, including Dead Eye, Ballistic, On Target, and The Gray Man, he traveled to more than fifteen countries and trained alongside military and law enforcement in the use of firearms, battlefield medicine, and close-range combative tactics.