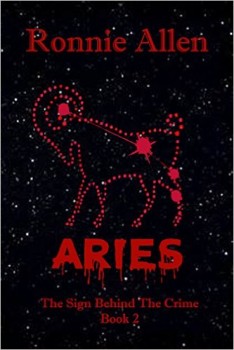 These days, you’re apt to find retired teacher Ronnie Allen poolside in sunny Florida, iPad in hand, deep at work on her next thriller. The setting is a fascinating juxtaposition—the bright light warring against the dark themes woven into Allen’s The Sign Behind the Crimes novels.

“I try not to bring my fictional dark into my real life,” she says. “But writers sometimes get even with people who upset them…in their novels.”

All kidding aside, the characters in Allen’s first two books do somewhat mirror her own life, at least when it comes to some specific skillsets—as a former school psychologist who later obtained her PhD in Parapsychic Sciences, Allen epitomizes the old adage, “write what you know.”

The Sign Behind the Crime series was born by combining her love of the crime genre with her vast career background. What she couldn’t find in textbooks or from past experience, Allen researched—extensively.

“Because I have a green personality, I have to know everything,” she says, noting that often Google doesn’t cut it. For ARIES, she interviewed a knowledgeable and generous detective who gave her the low down on certain aspects of of the job that would increase the novel’s authenticity. “Forensics and weaponry—you have to get those right.”

But she’s quick to remind readers that her books are works of fiction, and despite the fairly grim nature of her stories, she’s far more upbeat in person. Just ask her curious poolside companions who not only ask her questions about her writing, but also were instrumental in pushing her to finish her book.

Ironically, even though Gemini was the first in the series published, she finished ARIES before landing a contract for the novels—which is why the lead protagonist is different in each book. “I didn’t know if I should be writing a sequel to a novel that hadn’t sold yet, but by the time I got a contract for Gemini, I had fallen in love with the characters in ARIES.”

Which is why she’ll be bringing some of the characters from both books back for the third novel, Scorpio, and any other stories in her astrological-inspired series. This will strengthen the threads that tie the stories together, which all work under the fascinating premise: it’s the symbolism of the sign that solves the crime.

For each book, Allen researches the common traits of the featured astrological sign, focusing on the most negative characteristics, and of course, any well-known symbolism, such as color—ie: red for Aries.

It isn’t by accident Allen began with two of the most volatile of the astrological signs—Gemini and Aries—but she says even the “loving Leo” has some negative attributes she’s hoping to explore in the future. Which sign comes next in the series is determined by her readers—so far, Sagittarius and Cancer are leading the vote.

That’s not just good news for fans, but for the author as well, who says retired life means that she “can do what I want, when I want.” For now, she’s enjoying the novel process, but doesn’t rule out a return to screenwriting, where she first fell in love with writing, and is the reason her books have an authentic cinematic feel.

“Dialogue has always come easily for me,” she says. “And setting, which is why my novels take place in New York…” rather than her current real-life home in rural Florida, where Allen notes the cows and horses make up more of the population than the people.

When she grows tired of talking to fictional characters, Allen ventures into the cities where she loves to teach writing courses, attend conferences and seminars, and help other writers get their careers off the ground. It’s her way of giving back to a community that has supported her—before she gets back to the pool.

Ronnie Allen in a NYC native, relocated to rural central Fla. 8 years ago. She was a teacher for the NYC Dept. of Educ. for 33 years. In addition, she has a background in psychology and parapsychology. Aries is the second book in The Sign behind The Crime Series.