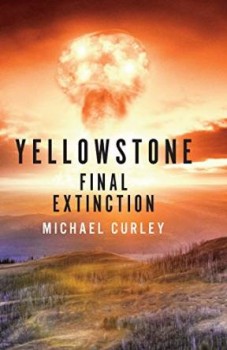 * A billionaire, eccentric terrorist from Istanbul buys an atomic bomb from two Russian colonels to set off a huge natural disaster that will end the world.

* All of the finest law enforcement and counterterrorism minds in the country are convinced that the bomb is destined for a weekday detonation in San Francisco, killing millions with the blast, poisoning millions more with radiation, and killing tens of millions more when the San Andreas fault slips and an earthquake rips up the coast of California…..all, that is but Michael Cornell, the FBI agent in charge of the case.

* “Are you telling me that an atomic bomb in Wyoming – in September – after the tourist season – will kill more people than a noonday blast in downtown San Francisco?” Says a senior FBI executive to the Vice President of the United States. “Sir, you have no idea.” The VP responds. “It will set off the Yellowstone volcano, which will end the world.”

* Molly McNamara makes her name in the Navy when – 6 years out of the Academy – she is a communications officer on a destroyer during a war game that her team is losing. She takes out her laptop and shuts off all of the electrical systems on the other team’s flagship, the USS Nimitz. As the Nimitz’ emergency generators each come on line, she shuts them down too. Five thousand sailors in the dark on a 101,000 ton ship moving at 20 knots out of control with no steering! Rather than court-martialing her, the Navy promotes her. Fifteen years later she is a 43-year old, 4-star admiral and the Chief of Naval Operations. She is the “father” of the Cyber Navy. She has invented a device – the “Auditor” – that enables the Navy to track ships all over the globe and personally supervises the sweep of the North Atlantic looking for the ship with the terrorist’s bomb.

* Stacey Coleman gets a NROTC scholarship to get her volcanology Ph.D. from the University of Hawaii under a famous geology professor who is now the Vice President of the United States. She organizes the University’s marksmanship team and wins a Silver Medal in the Olympics while on active duty in the Navy. She is working on a grant at the Yellowstone Volcanic Observatory (YVO) when she is recruited by FBI agent Cornell on orders from the Vice President. She is unaware her boyfriend – a Park Ranger – is a traitor. The terrorists arrive with the bomb. Everyone, including the 388th Fighter Wing, prepared for an air strike, converges on the YVO borehole drilled into the volcano’s caldera…..

YELLOWSTONE is available from Amazon, Barnes & Noble and iTunes.

“A thriller that serves up ever-building tension. Michael Curley’s debut offers a riveting tale of terrorists who seek to exploit a vulnerability that’s practically right underneath our feet.”
–Tom Young, author of The Mullah’s Storm, Silent Enemy, and Sand and Fire.

Michael Curley is a lawyer and currently a Visiting Scholar at the Environmental Law Institute in DC. He teaches and writes books about environmental law and finance. When he’s not doing that, he is building clean water and basic sanitation systems for the rural poor in Central America and writing a book about how to do this with colleagues from Johns Hopkins University. And when he’s not doing that, he’s writing thrillers…..