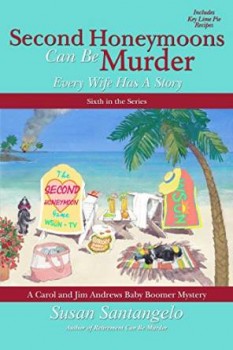 Carol Andrews can’t believe her luck when her husband, Jim, surprises her with a second honeymoon trip to Florida. But there’s a catch – it’s really a business trip, not the romantic getaway Carol expects. Jim’s been called out of retirement to create a marketing plan for a new television game show aimed at Baby Boomers, The Second Honeymoon Game, and the pilot episode will be shot in the Sunshine State. The honeymoon is really over when the show’s executive producer, none other than Carol’s grammar school boyfriend, winds up dead on Carol and Jim’s first night in Florida. And their son, Mike, is the police’s number one suspect.

SECOND HONEYMOONS CAN BE MURDER is available from Amazon.

Susan Santangelo is the author of the humorous Baby Boomer mystery series, featuring a typical Boomer couple, Carol and Jim Andrews, as they navigate their way along life’s rocky path toward their twilight years. Book 1 in the series, “Retirement Can Be Murder,” was suggested for a television series by several national critics. Book 6 in the series, “Second Honeymoons Can Be Murder,” will be released by Suspense Publishing in February 2016. She also reviews mysteries for Suspense Magazine.

Susan divides her time between Belleair Beach FL and Cape Cod MA. She is a member of Sisters in Crime, International Thriller Writers and the Cape Cod Writers Center, and shares her life with her husband, Joe, and two very spoiled English cocker spaniels, Boomer and Lilly. Boomer also serves as the model for the books’ front covers.

Cause & Effect by Derek Thompson