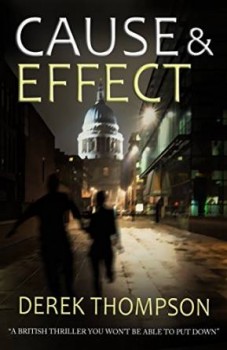 A seemingly random attack on a child and a clinical assassination – neither one is any of Thomas Bladen’s business, but all that is about to change.

When his girlfriend Miranda’s father calls in a favour, Thomas must use all his surveillance skills to investigate the attack for a man he despises. Jack Langton may be in prison now, but he is still pulling the strings and everybody’s dancing. As Thomas delves deeper, he finds out the truth about Miranda’s past and his investigation takes him closer to the dark heart of the Shadow State. It’s going to get messy.

Cause & Effect is the third in the Thomas Bladen series, following Standpoint and Line of Sight. The books can be read sequentially or as standalone novels.

“Love the characters and the plots. Haven’t read a series this good in years. Please keep writing them!”

CAUSE & EFFECT is available from Amazon and Amazon UK.

From Book 1 in the series:
“Difficult to put down – a real page-turner of a thriller that grips and holds the reader. Well-drawn three-dimensional characters, with great interplay between them – some romantic, some professional – and a plausible plot that both fascinates and surprises. Shadowy agencies rub up against London’s criminal underworld in a dynamic dance where the reader can’t really be sure of anybody’s loyalties until the very end. Definitely recommended, even if you’re not primarily a thriller reader.”