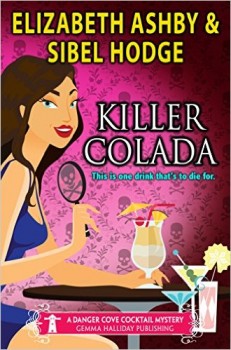 It’s been a stressful couple of months for bartender, Hope Foster, so her best friend Ruby treats her to an afternoon of holistic pampering with therapist Pandora Williams. But what should be a relaxing getaway turns into a murder scene when Hope and Ruby stumble across Pandora’s lifeless body in the kitchen next to a killer cocktail.

Hope is convinced that the police are barking up the wrong tree when it comes to suspects. But as she digs further into Pandora’s past, it’s seems she’s opening the proverbial box.

Twenty years ago, Pandora’s daughter, Jenna, disappeared one night after arranging to meet her fiancé, Tim, to break off their engagement. Pandora had always believed that Tim killed her daughter, although she’d never been able to prove it. Is Pandora’s murder connected with a decades-old family tragedy? Or has someone used the past as a convenient way to frame the fiancé?

With the police wearing blinders, it’s up to Hope, Ruby, and ex-FBI agent Vernon to find out the truth…at any cost!

Sibel Hodge is the author of No. 1 Bestseller Look Behind You. Her books are International Bestsellers in UK, USA, Australia, and Germany. She writes an eclectic mix of genres, and she’s a passionate human and animal rights advocate.

Her work has been shortlisted for the Harry Bowling Prize 2008, Highly Commended by the Yeovil Literary Prize 2009, Runner Up in the Chapter One Promotions Novel Comp 2009, nominated Best Novel with Romantic Elements in 2010 by The Romance Reviews, Runner Up in the Best Indie Books of 2012 by Indie Book Bargains, Winner of Best Children’s Book by eFestival of Words 2013, Winner of Crime, Thrillers & Mystery | Book from a series in the SpaSpa Book Awards 2013, Nominated for the 2015 BigAl’s Books and Pals Young Adult Readers’ Choice Award, Readers’ Favourite Young Adult – Coming of Age Honourable Award Winner 2015, and New Adult Finalist in the Oklahoma Romance Writers of America’s International Digital Awards 2015. Her novella Trafficked: The Diary of a Sex Slave has been listed as one of the Top 40 Books About Human Rights by Accredited Online Colleges.