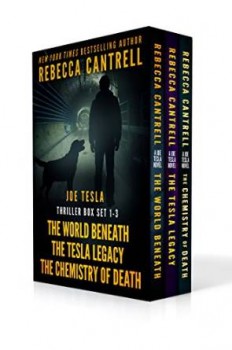 Get all three thrillers in the award-winning Joe Tesla series for a special low price!

THE WORLD BENEATH:
Award-winning and New York Times bestselling author Rebecca Cantrell drops you into a vast, dark world: 100 miles of living, breathing, tunnels that is the New York City underground. This subterranean labyrinth inhales three million bustling commuters every day. And every day, it breathes them all out again… except for one. Software millionaire Joe Tesla is set to ring the bell on Wall Street the morning his company goes public. On what should be the brightest day in his life, he is instead struck with severe agoraphobia. The sudden dread of the outside is so debilitating, he can’t leave his hotel at Grand Central Terminal, except to go underground. Bad luck for Joe, because in the tunnels lurk corpses and murderers, an underground Victorian mansion and a mysterious bricked-up 1940s presidential train car. Joe and his service dog, Edison, find themselves pursued by villains and police alike, their only salvation now is to unearth the mystery that started it all, a deadly, contagious madness on the brink of escaping The World Beneath.

THE TESLA LEGACY:
In New York Times bestselling author Rebecca Cantrell’s sequel to the award-winning The World Beneath, software genius, Joe Tesla, confronts an equally brilliant and far more powerful foe. Still crippled by agoraphobia and confined to the tunnels under New York City, Joe is haunted by the fact that he cannot even attend his father’s funeral. His father’s death brings threats to the safety of Joe’s underground home: guilt over the broken relationship that can never be healed, a mysterious box of papers inherited from eccentric inventor Nikola Tesla, and a ruthless enemy determined to steal those papers no matter the cost. Mystified by why his inheritance is so valuable, Joe and his service dog, Edison, follow clues left a century ago by Joe’s famous ancestor to reveal the power of his family legacy. While Joe must rely on his considerable talents as a hacker, he must also reach out to friends. But whom can he trust as he battles to save his beloved city from . . . The Tesla Legacy?

THE CHEMISTRY OF DEATH:
Sticks and stones may break my bones, but words can never hurt me…or can they? In the third thrilling installment of this award winning series from New York Times bestseller Rebecca Cantrell, tortured genius Joe Tesla is on the trail of a sadistic serial killer who charms his victims into the bowels of the Manhattan subway system–and who holds the keys to Joe’s crippling condition. Can Joe stop the murderous rampage of this silver-tongued killer, or will he become the next victim?

Ready to follow Joe Tesla and his service dog, Edison, into the darkness? Grab your copy of The Joe Tesla Box Set and get three full-length Joe Tesla thrillers (more than 800 pages!) in one volume at a special price!

“Cantrell has ventured into deep, dark places…a taut and dangerous struggle.” — The Edge

“The Tesla series is an excellent, original, and addictive series…Cantrell is firmly ensconced as one of my go to Thriller writers now.” — Parmenion Books

“Cantrell’s THE WORLD BENEATH simply blew me away: exciting, visceral, inventive, illuminating…a shocking thriller that shines a light on the beauty and horror hidden just out of sight beneath the world’s greatest city.” — James Rollins, New York Times bestselling author of The Bone Labyrinth

“Prepare to stay up all night… this is one of ‘those’ books!” — Mamabear Cherei

New York Times and USA Today bestselling author Rebecca Cantrell has published nine novels in over ten different languages. Her novels have won the ITW Thriller, the Macavity, and the Bruce Alexander awards. They have been nominated for the GoodReads Choice award, the Barry, the RT Reviewers Choice, and the APPY award. She and her husband and son live in Berlin. Find Rebecca Cantrell on Facebook, Twitter, and at www.rebeccacantrell.com.