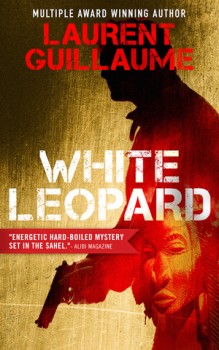 Have I ever been to Mali? No. Can I find it on a map? Vaguely, over there somewhere.

Both of these facts made me a little nervous when sitting down with award winning French author Laurent Guillaume, who’s written a hard-boiled noir about a refugee French cop who sails into the middle of an extraordinary case in Mali.

Given Laurent is both an ex-cop and a former advisor to the Mali police, it’s perhaps no surprise that this book has a rather excellent premise. I sat down with him and translator Sophie Weiner, who made sure an Australian interviewing a Frenchman via an American all went smoothly.

Hi Laurent (and Sophie!), thanks for agreeing to speak to The Big Thrill. Can you tell our readers a bit more about WHITE LEOPARD?

In 2009, a Boeing 747 unloaded some mysterious cargo in northern Mali and got stuck in the sand trying to take off again. The plane had just delivered several tons of cocaine that was headed to Europe and the Middle East. Investigating this case, we uncovered an extremely well organized network of Colombian and Spanish drug traffickers that settled scores with dollars or a chainsaw, depending on how much opposition they got. I had wanted to write a novel about the drug trade in Africa for a long time, but I didn’t know what angle to attack it from. I hesitated between an approach like Don Winslow used in Power of the Dog, his thriller that takes a deep look at drug trafficking between Mexico and the United States, or using the point of view of one person. I chose the latter, and the Air Cocaine case inspired the story.

Then all I needed was the imaginary vehicle: a protagonist who, like me, travels between two worlds. Solo was the obvious choice. His father’s Malian, his mother’s French, and he’s split between two continents, two religions, and two approaches to life. He is also a former French police officer who is running away from a dark past in France. He has no more family, and his life is in ruins. He wants to die, but despite the trauma and the solitude, he can’t, because his desire to live is so deeply engrained. He drinks, snorts coke, and spends time with ladies of the night… he’s not really a good guy, but he’s the kind of man I like.

What struck me about WHITE LEOPARD was your vivid description of Mali. Can you tell us about writing in a place you’re familiar with, but not actually from?

When I arrived in Bamako in 2007 to cooperate with the Mali police, I suffered real culture shock. I had to adapt and understand the country, with basic social foundations that are very different from Western values. Over time, I came to love Mali, a little bit like a second homeland. When I returned to France, at the end of my assignment, I felt really torn.

It’s important to understand that Mali is one of the poorest countries on the planet. Toubabs like to go there to bathe in African wisdom. They arrive with their vision of the continent and see only what will support their pre-conceived ideas. In a way, they reassure themselves and then they leave, a bit weepy but full of certitudes.

It takes time to see what lies beneath the postcard, to see the stark reality of the people who live there. I hope that I managed to do this, although I’m sure I missed things. More than a mystery,  WHITE LEOPARD pays homage to the people of Bamako, a mixed crowd in overpopulated streets, who never stop smiling and feeling happy, despite the harsh conditions of their daily life.

You’ve written about things you’re familiar with–Mali and police work. Was there anything in WHITE LEOPARD that challenged you a little more?

The hardest part for me was to project myself into the mind of a protagonist of mixed racial background. In addition, I wrote in the first person, which was something new for me. This type of writing created a kind of intimacy with Solo, to an extent that I had not imagined possible. Souleymane Camara embodies the issues faced by people who come from two cultures. This is an issue I’m passionate about and I was afraid of falling into caricatures. All his life, he’s been asked to make a choice, to sacrifice one of his halves for the other. Furthermore, his exile in Mali follows a family trauma; it wasn’t a wholehearted choice, but more a “lesser of two evils.” Little by little, he falls in love with the country, like I did personally, and he slowly realizes that Bamako is his home. At the end of the book, he realizes that he cannot amputate a part of himself. The black and the white are mixed in him to create something else. His double background is a chance; he is a hyphen. I think that at the end, he finds a kind of peace.

Our readers are always interested in the writing process. You write full time, so what does your average day look like? How do you approach writing a novel?

My typical day resembles that of many novelists, or so I imagine. I get up at seven in the morning, eat a hearty breakfast and work out for a good hour. Back at home, I sit down in front of my computer and answer my email. Then I do some research, and when I feel ready, I open up Word and start writing. I generally write until four in the afternoon, when I read to relax and find a change of pace. I read a lot of American mysteries and thrillers. I especially love David Goodis, Dashiell Hammet, and Chester Himes. More contemporary authors I read include George Pelecanos, Herbert Lieberman (his incredible Necropolis changed my life), and Don Winslow. I like how these great authors have such efficient writing, without any wasted words. Sometimes, when I’m late delivering a manuscript to publisher, I write at night.

I’m curious about the process of working with a translator. Is it a smooth process or does it require some hard work to make it work and, ultimately, ensure a better book?

I didn’t work directly with the translator Sophie Weiner. My American editor, Anne Trager,  served as the intermediary. As far as my understanding of English allows, Sophie did an excellent job. I’m not surprised, because throughout the process, she showed great rigor and a real interest in the topic of the novel: West Africa. I’m very happy with the result.

What’s next for Laurent Guillaume and for Solo? Surely after this case he might want to give up the PI business and develop some other interests?

I haven’t yet decided what is next for Solo. In the meantime, I wrote another novel, a mystery that takes place in France, with my recurring character, Mako. As for Solo, I don’t think he’ll abandon his career as a private eye, because he’s a former cop, and doesn’t know how to do anything but investigate.

To finish off, can you give our bilingual readers an extra treat and tell them, in French, what they can expect from WHITE LEOPARD?

If you read WHITE LEOPARD, get ready to travel to a country you’ll probably never get to visit. Ride shotgun in Solo’s old, dilapidated SUV and follow him in his desperate search for the truth. Travel down the roads of Mali, challenge a gang of bloody drug traffickers, and keep reminding yourself that ninety percent of what you are reading is true…>

Author: Laurent Guillaume is a multiple-award-winning French writer and former cop. In law enforcement, he worked anti-gang, narcotics, financial crimes, and served in Mali as advisor to the local police. He is now a fulltime writer.

Translator: Sophie Weiner is a freelance translator and book publishing assistant from Baltimore, Maryland. After earning degrees in French from Bucknell University and New York University, Sophie went on to complete a master’s in literary translation from the Sorbonne.