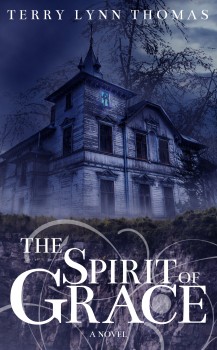 Sarah Bennett’s return to her father’s home mid-war is anything but a happy reunion. Having spent the last year in an asylum and under suspicion of killing her mother, Sarah’s release is marred by unanswered questions, distrust in her new stepmother, and paranoia about war spies. A second murder heightens everyone’s suspicions and the pressure mounts for Sarah to remember the fateful night of her mother’s murder in order to clear her name.

Harkening back to popular gothic suspense novels, THE SPIRIT OF GRACE offers elements of the supernatural, a glimpse of old world San Francisco, and a hint of romance.

Thomas’s debut, the first in the Sarah Bennett series, features a “feisty heroine who overcomes her inner struggles as she thwarts the bad guy.” The series will follow Sarah as she struggles to accept and keep secret her “unique ability,” despite the strain it places on her relationships. An amalgamation of men and women that Thomas admires in her own life, Sarah exemplifies strength, curiosity, and a “plucky attitude.”

The setting for THE SPIRIT OF GRACE in old world San Francisco represents one of Thomas’ passions, as she spent many years in the San Francisco Bay area before moving to Mississippi with her husband. “When I lived near the City and worked there, I could ‘feel’ old San Francisco, especially since some of the old buildings are so timeless. San Francisco has a unique charm, which resonates with me,” she says. Setting the novel in the past allowed Thomas “to create a world (and inhabit it in the abstract) where everyone is ‘unplugged’ and relating to each other in a more genuine way.”

Garnering influence from the old television soap opera Dark Shadows, Thomas says she is drawn to television murder mysteries, such as Masterpiece Theatre. “I do love the old Agatha Christie’s, with Joan Hickson as Miss Marple, and I enjoy Rosemary and Thyme, Downton Abbey, and Land Girls. As you can see, I really like British drama.”

But Thomas’ true passion is reading, noting that she will “read for pleasure,” while outlining her books, but “once I start the actual composition, I don’t. That way I have something to look forward to as I inch towards finishing my first draft.”

Thomas describes her love of Simone St. James and Susanna Kearsley “because they basically have reintroduced an old genre that fell out of favor—gothic suspense.” Thomas notes, “both of those women write books that remind me of the writers that I grew up with, such as Mary Stewart, Victoria Holt, Phyllis Whitney, and Dorothy Eden.” Thomas just finished listening to The Fingerprint, by Patricia Wentworth and is currently reading A Curious Beginning by Deanna Raybourn.

With regards to her writing process, Thomas says, “I love writing, and can do so anywhere. I write on a computer, but am trying to incorporate longhand into my regime as much as possible. I figure when I go back and type it, I can fix a lot of the problems. This is an experiment, so we’ll see how that works out.” Because Thomas continues to work at her day job, she writes early in the morning, between 4:00 and 5:00 am, with a goal of writing 7000 words a week. Her must have? “I cannot function without coffee in the morning, and couldn’t dress myself, never mind write a word, without it.”

Thomas says she did “a happy dance all over the house” when Black Opal Books accepted THE SPIRIT OF GRACE. But she was quick to add that the fears of “What if…, What if no one likes my book?” soon overshadowed that excitement. “My one wish is that the stories I tell will resonate with someone, touch them in some profound way.”

“I would tell anyone who wants to write, to do just that. To write, write, and write some more,” she continues. “There’s a William Falkner quote that I love: ‘Don’t be a writer, be writing’.” And finally, “Be patient. It takes a long time—at least it did for me—to learn to write good fiction. I still have a long way to go, and am still learning every day.”

When she’s not writing, Thomas enjoys spending time outside. “I have two dogs and a horse, and love to be outside in the woods with my animals and my husband. When we travel, we go to the mountains or the beach. I prefer a windswept, violent coastline, but that should come as no surprise. In my fantasy world, I get to gallop my horse, Dusty, on the windswept moors after an intense writing session. The true facts are that after I write or when I am in a muddle over a plot or character issue, I go outside! Being out in nature clears my head and rejuvenates me.”

When asked if there were other careers she would have chosen instead of being a writer, Thomas was candid. “I might have become an art restorer. Wait. No, I would be a writer. I love it and know in my heart that writing novels is exactly what I am supposed to be doing.”

“If I had to do over again, I would have taken myself seriously as an author years ago. It’s hard to do that, because life, bills, responsibilities get in the way, but if you are doggedly determined, and you don’t give up, the dream can become a reality.”

Thomas noted she has a “drawer full of ideas” for the character Sarah Bennett, and hopes Sarah will be around for a long time. As for the romance between Zeke and Sarah, readers will have to wait and find out how these two characters’ paths will cross in future novels. 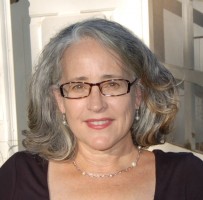 Originally from the San Francisco Bay Area, Terry Lynn Thomas married the love of her life, who promised to buy her a horse if she relocated to Mississippi with him. Now that she has relocated, she has discovered that she can be happy anywhere as long as she has her man, her horse and time to write. Terry Lynn read Mary Stewart, Victoria Holt, and Daphne Du Maurier as a child. These gothic mysteries captured her imagination, never let go, and influence her writing today. When she is not writing or riding her horse, she visits historical houses and cemeteries, hunting for story ideas.