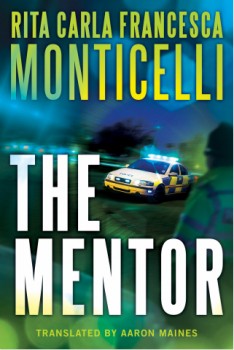 As a longtime lover of cinema, Italian author Rita Carla Francesca Monticelli began her writing journey with screenplays. From there, she progressed to fan fiction based on movies—in fact, her first novel was a piece inspired by The Mummy.

Today, the pacing she learned from these iconic films is reflected in her novels. As one might expect from a woman who writes in multiple genres, her reading tastes are eclectic, ranging from Little Women to The Silence of the Lambs.

Although her degree is in biology, Monticelli works as a researcher, scientific and literary translator, freelance web copywriter, and author. Her novels, all of which were originally written in Italian, include L’isola di Gaia (The Isle of Gaia), Affinità d’intenti (Kindred Intentions), Per caso (By Chance), and a science fiction series, Deserto rosso (Red Desert), set on Mars. Her sixth and latest book, THE MENTOR, features a Scotland Yard detective who is both moral and morally flawed, a dichotomy that drives the narrative and gives the story dimension.

Monticelli took time from her busy schedule to answer some questions for The Big Thrill about her writing—and especially about THE MENTOR.

You began your writing journey with screenplays and fan fiction. Where did you go from there?

My first attempt to write original fiction dates back to 2009. I’m a science fiction and thriller fan, so I started writing a cyberpunk techno-thriller titled L’isola di Gaia (The Isle of Gaia). It took me nearly three years to finish that first draft and then I put it aside for a long while. Instead, my adventure in the publishing industry started in 2012 and 2013, when I wrote and self-published a hard science fiction series set on Mars titled Red Desert (the original title is Deserto rosso, but this series is also available in English), which became a Kobo and Amazon bestseller in Italy.

As you can see, I’m quite a prolific writer. I’m one of the few independent fiction authors in Italy currently living off of their writing.

What was the inspiration for THE MENTOR?

I’m a CSI fan, and a couple of years before writing this story, I was playing with the idea of a British forensics detective who didn’t follow the law, which is exactly what you (almost) never see with the main characters in the various CSI series.

Yes, that’s one of the most surprising elements of the book. Your protagonist, Eric Shaw, is a Scotland Yard detective who fabricates evidence in the interest of catching criminals who seem beyond the law. How did you decide to give him a flaw that might make readers consider him “a dirty cop,” and how did you make him a sympathetic character in spite of this flaw?

My main characters are usually anti-heroes and quite controversial. That’s because characters who feel like real people are what I look for in books I read. Real people are always flawed somehow. I think that creating a character dwelling in the “grey zone” between good and evil makes it easier for the reader to identify with them.

The book opens with a very dramatic scene—a young girl witnessing the slaughter of her family. Did you always know this was where the book would begin? And did you know the ending when you started it?

When I started outlining the story, about a month before putting myself in front of the blank sheet, the very first thing I imagined of this story was the ending. The beginning was the second.

How did you balance the romance and the suspense in the book?

It happened in a quite natural way. Romance is a great tool to create conflict. I tried to alternate the investigation with the personal conflicts of the main character, because this novel isn’t really about finding the culprit, but rather about observing how the main character decides to react to his findings.

What do you hope readers will take away from it?

I hope they’ll question themselves, even just for a minute, about what’s really right or wrong. My novels always try to show how good and evil can be different or even opposite when seen from a different perspective.

I don’t think that aspiring writers really exist. I mean, if you just aspire to write, you don’t write! But the advice I give to writers aspiring to complete and publish their novel is: read a lot, write a lot, don’t write about yourself, but write what you’d like to read.

Are you working on a new project?

I’m working on a sequel to THE MENTOR, titled Syndrome (the first draft is ready; the editing process is coming next), which is going to be the second book in a trilogy. I’m also working on a science fiction thriller, titled Ophir, set in the same universe as Red Desert and L’isola di Gaia (The Isle of Gaia). I hope to have more books available in English soon.

Is there anything you’d like to tell us that I haven’t asked you? A question you’ve always wanted to be asked but never have been?

Yes: What’s your favourite fiction character? The answer is, Hannibal Lecter, of course. Hannibal Lecter is the quintessence of anti-hero. Even if he is a murderer and a cannibal, he isn’t the real villain in his books. You manage to know him and love him, and he becomes your hero. This is the perfect example of how good and evil may be subjective. And all this is possible thanks to a great author like Thomas Harris. 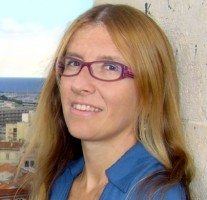 Rita Carla Francesca Monticelli was born in Carbonia, Italy. She has lived in Cagliari since 1993, earning a degree in biology and working as a writer, researcher, scientific and literary translator, and freelance web copywriter. Monticelli has authored L’isola di Gaia (The Isle of Gaia), Affinità d’intenti (Kindred Intentions), and the science fiction series Deserto rosso (Red Desert), which is also available in English. The Mentor is her sixth book.

To learn more about Rita, please visit her website.