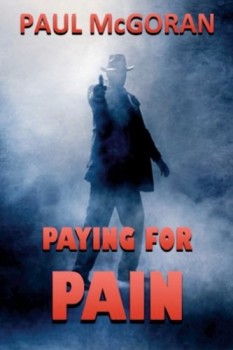 Paul McGoran is no academic, but his volume of short stories from New Pulp Press, PAYING FOR PAIN, is prefaced with an essay on the noir genre that displays a thoughtful and deeply-considered interest in the theoretical side of crime fiction. In the essay, he identifies five essential elements of noir—crime, obsession, fatalism, perversion, and betrayal. He then announces the theme of his collection as the “geography of noir”—McGoran’s term describing the genre’s predilection for urban settings.

As with any book of short fiction, however, it’s the stories that matter. And PRAYING FOR PAIN contains a quartet of suspenseful noir tales and a 100-page novella titled, No Good Deed. It’s a world peopled with ex-cons, Mafiosi, common thugs, killers, accountants, clerics, models, yachtsmen, society dames and trust-fund layabouts. The upper, middle and lower classes collide in San Francisco, Las Vegas, Miami, Newport, Boston and Puerto Vallarta. You’ll be caught in a twisted travelogue that conjures up a dark and peppery vision of the urban experience. Noir fans should love it.

McGoran’s first novel, Made for Murder came out in August 2015, and was featured in the November issue of The Big Thrill. PAYING FOR PAI N is his follow-up volume. A sequel to Made for Murder will debut sometime in 2016.

We noticed none of your stories were set in New York or Los Angeles. How come?

Good catch. Well, those cities are the great instruments fingered and bowed by Raymond Chandler, Cornell Woolrich, Robert Crais, Lawrence Block, and any number of others. I knew I couldn’t improve on their work.

Do you have a different mindset when writing a short story versus a novel?

You know, writing often takes you in unexpected directions. But when I begin what I think will be a short piece, I go for a limited theme, limited setting, and limited time frame. Even so, I have a hard time keeping within the expected word limit. I’ve done short stories as long as 6,500 words. That’s partly why I put a collection together. Magazines seldom want more than 2,500 words, even though every story has its own proper length.

We’ve heard some writers cannibalize novels in order to mine them for short stories. Do you?

Guilty as charged! Especially the novels that don’t sell; there are always parts of them that are salvageable. But you can’t just pull out a chapter and call it a short story. At the very least, you’ll have to strip out things that made sense in the novel but no longer have a reference. And the ending may need to be altered for a satisfying closure.

What is the most difficult thing you face in the writing life?

In starting out, I’d say it was discouragement. We all expect rejections from publishers and agents, but when that continues for years, you begin to doubt yourself. I had an early acceptance of a short story by a U.K. webzine, and I came awfully close to having my first novel bought by a Canadian publisher shortly after I finished it. But after that, I went eight years before my breakthrough with Made for Murder. There was a spell of four years when I stopped writing altogether. I wasn’t blocked—something I don’t believe in—I just couldn’t see the point in hanging on to the dream. I had lost heart.

Nowadays, the most difficult part of the writing life for me is the need for continual self-promotion. At first, I couldn’t figure out how to get started. Slowly, I’m getting there, but it cuts into writing time. A universal complaint, I guess.

You said you lost heart. How did you get it back?

There was this nagging sensation, a hole in my life that wouldn’t heal. I was like a kid with a helicopter parent expecting a better effort from me. In late 2014, I compiled a list of likely small publishers and put out queries. Six months later, I was ready to throw in the towel once more when I received a contract for Made for Murder.

Tell us about humor in the noir genre. Is the vision too bleak to allow for a few laughs?

Not at all. Although you won’t find much slapstick in noir, you have a perfect right to look for comic relief. The humor may tend toward irony and cynicism, but you risk losing readers if they fail to see any light in the darkness. Take any good novel, noir or otherwise, and you’ll find humor at least in the minor characters. The best noir, like the best horror, has a real need for laughs—even if just to relieve the tension.

Any advice for the novice?

If you love it, keep at it. Your breakthrough will come, even if it’s not at the level you expected. You’re going to want acceptance, it’s only natural. But you have to love creating more than you want big time success.

Paul McGoran lives and works in Newport, Rhode Island. His first novel was the noir thriller MADE FOR MURDER. He began writing crime fiction after a long career in marketing. His favorite thing about writing is disappearing into the mind and thoughts of his characters. He is convinced that writers like him have a form of multiple personality disorder–without the alarming clinical symptoms.