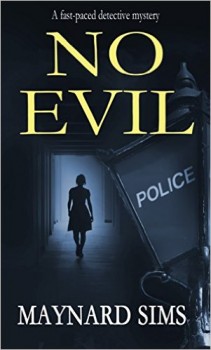 A girl’s body is found. Her eyes, ears, and mouth have been sewn shut.

DCI Jack Callum leads the investigation into this gruesome crime which shatters the peace of a sleepy 1950s English town. Images of three monkeys are sent to the police to taunt them: see no evil, hear no evil, speak no evil.

Something very nasty is going on and more victims come to light. Who is doing this and why? DCI Callum looks like he’s closing in on the culprits, but then a team of detectives from London is brought in to take over the case.

In a breathtaking finale, Callum must race against time, and break his own rules, to save someone very close to him.

If you like Robert Galbraith, Rachel Abbott, Ruth Rendell, or Mark Billingham you will be gripped by this exciting new crime fiction writer. Full of wonderful period detail and twists and turns.

NO EVIL is the first in a new series of crime thrillers set in the 1950s, featuring DCI Jack Callum. He’s an ordinary policeman in an ordinary English town. The crimes he investigates are far from ordinary. Jack Callum has a keen mind and is passionate about his job and family. He doesn’t believe in capital punishment but has caught a few villains whose life has come to an end on the gallows.

No Evil is the first in the DCI Jack Callum series of crime novels.

NO EVIL is available from Amazon and Amazon UK.

Len Maynard and Mick Sims writing as Maynard Sims are the authors of 16 novels with No Evil the 17th. We have three novels in our Bahamas series scheduled for release, and others on the horizon. We have previously self published three thrillers. We have had ten story collections published, as well as novellas, screenplays and have edited several books – the most recent being an ITW linked crime story anthology Capital Crimes. www.maynard-sims.com

Crossfire: The Scales of Justice by John Hegenberger

The Alexandrite Necklace by Daco and Robert Rotstein