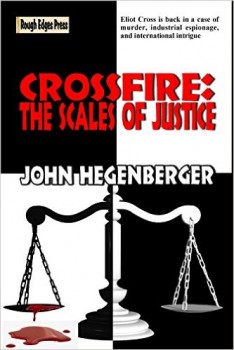 In 1988, a burnt-out Midwest PI faces a series of bizarre deaths while investigating industrial espionage that threatens the Summer Olympics.

A vanishing corpse…a clout on the head…industrial espionage with millions of dollars at stake…an international conspiracy that threatens the 1988 Summer Olympics…These are just some of the problems private investigator Eliot Cross has to untangle in CROSSFIRE: THE SCALES OF JUSTICE, the newest novel from popular author John Hegenberger. Fast-paced, filled with mystery, action, and humor, CROSSFIRE is a private eye yarn in the classic mold and a sure bet for entertainment.

“Cross is engaging, the secondary characters are colorful and skillfully drawn, the writing is crisp and well-paced. It all makes for an entertaining trip down the hardboiled side of the street.” – Wayne D. Dundee

CROSSFIRE is available from Amazon.