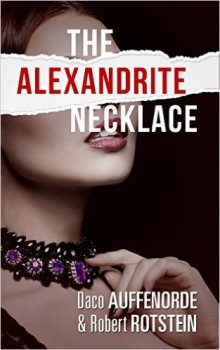 Struggling actress Violet Edmondson has always believed that she’d become a famous movie star. She’s exceptionally beautiful and immensely talented. But the success she’s always expected, always craved, hasn’t happened. Her husband, Richard, has failed her—he works for a powerful talent agency, but he’s only an assistant and can’t help further her career. Although Richard does everything he can to please his wife, Violet is unsatisfied in her marriage, frustrated with life.

Then, Richard wheedles an invitation to an important Hollywood gala, but Violet refuses to go because she doesn’t have the right jewelry. Richard borrows from his meager retirement fund to buy her a necklace but, to save money, takes her to a shop that carries discounted merchandise. Violet is about to walk out of the store when she notices a case containing a rare antique necklace made of black platinum and the rare gemstone Alexandrite. Violet becomes enthralled with the necklace, but the strange old man who owns the shop tells her it’s not for sale. Eventually, though, Richard manages to convince the shopkeeper to sell him the necklace.

The necklace changes Violet’s life. But is the change for the better?

Based on the classic short story by Guy de Maupassant, The Alexandrite Necklace is a tale of horror, greed, ambition, and love.

THE ALEXANDRITE NECKLACE is available from Amazon.

Daco Auffenorde is an award-winning author of the espionage-thriller series featuring CIA operative Jordan Jakes. Her debut novel, The Libra Affair, was a 2013 #1 best seller. Of The Libra Affair, Publishers Weekly said, “The keenly sharp intelligent female characters soar in this edge-of-your-seat adventure…”

Robert Rotstein is the author of the Parker Stern series. The first Parker Stern novel, Corrupt Practices, received a Booklist starred review. #1 New York Times–bestselling author Sue Grafton said of Corrupt Practices: “This is a terrific book. Just terrific. Robert Rotstein has come up with a fresh take on the legal thriller and he does a first-rate job. Parker Stern is a complex and well-developed protagonist and the story is beautifully structured for maximum intrigue and suspense.”

Robert’s Reckless Disregard (Seventh Street Book, June 2104), the second in the Parker Stern series, received a Kirkus starred review and a Booklist starred review, and was a Kirkus Review top thriller of 2014.

Robert practices intellectual property law with the Los Angeles firm Mitchell, Silberberg & Knupp, LLP, and has represented all the major movie studios and record companies, as well as many producers, directors, and writers.