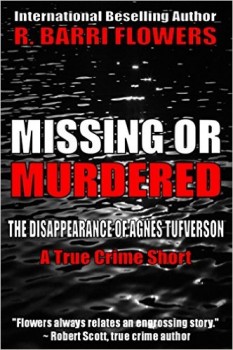 From award winning criminologist R. Barri Flowers and the bestselling author of Murder of the Banker’s Daughter, Murder at the Pencil Factory, and The Sex Slave Murders, comes an gripping new historical true crime short,: Missing or Murdered: The Disappearance of Agnes Tufverson.

On Monday, December 4, 1933, attractive New York attorney Agnes Colonia Tufverson, 43, and Ivan Poderjay, a captain in the Yugoslav army, ten years her junior, got married at the Little Church Around the Corner in New York City. What promised to be a storybook romance for Agnes, with a bright future of travel and adventure turned out to be anything but for the.

Included are bonus excerpts from other bestselling true crime tales by the author, including Murder at the Pencil Factory, The Sex Slave Murders, and The Amityville Massacre.

MISSING OR MURDERED is available from Amazon, Barnes & Noble and iTunes.