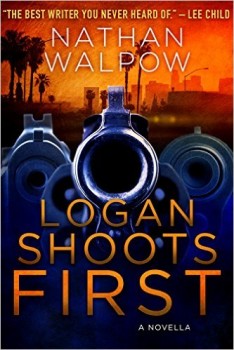 It?s the cold case that?s haunted Logan for seven years. The man who kidnapped the mayor’s daughter … and did worse things to other girls on the cusp of womanhood. The lowlife who vanished without a trace after Logan blew his chance to catch him.

When a crime family starts grabbing teenage girls off the streets of Los Angeles and forcing them into a lfe of prostitution, Logan and his crew aim to track them down. The search leads them from the sprawl of the San Fernando Valley to the desolation of the Antelope Valley to the dirt and stench of a downtown Los Angeles truck stop. He deals with the best of the best and the worst of the nasty. He employs resources old and new, from friend-with-benefits Suzy Coulson, proprietor of a halfway house for abused women, to longtime comrade Thomas Jefferson Adams, a man who thinks nothing of hijacking a shipment of Stinger missiles if it’s to protect his family.

Suddenly there’s a lead on the Slasher. Logan drops everything to pursue it, leaving his young team to work the prostitution case. He’s well aware that they might not be ready for the responsibility. But he’s so immersed in his guilt over letting the Slasher slip through his fingers that he can’t protect them … with dire consequences for all concerned.

Nathan’s fifteen minutes of fame came in 1985, when he was a five-times-undefeated champion on Jeopardy! He got a degree in chemical engineering before discovering the other half of his brain. He acted in a bunch of plays, received two Drama-Logue awards, and got cut from an episode of Moonlighting before stumbling into a short story class at UCLA extension and quickly discovering he was a far better writer than actor.

He began kicking out stories, most of them science fiction or fantasy, and managed to sell some. Reading the complete works of Raymond Chandler prompted a switch to crime fiction. One fortuitous meeting with an agent at a writer’s conference later, he had a book deal. He was fifty years old when his first novel was published. So was Chandler. Read into this what you will.

Besides the Logan novellas, Nathan’s work includes four novels in the Joe Portugal mystery series. His novella Push, set in the world of professional wrestling, is an expansion of “Push Comes to Shove,” selected for the Best American Mystery Stories series. His short story “A Good Day’s Work,” originally in Orange County Noir, has been optioned for a movie.