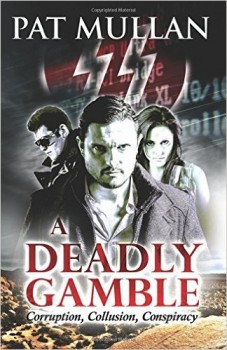 Corruption, Collusion, Conspiracy leads to one man’s downfall. Fear, Hope, Despair take you from New York to Las Vegas in this fast, tense, tale. Revenge drives you to Asuncion, Paraguay.

Jim Sharkey, a failed banker, is both the hunter and the hunted. Left to die in the Mojave desert he survives and seeks revenge. The flow of money through the global banking system was once his life-blood. Now it threatens to be his poison. London, Zurich, and the Isle of Man set the stage for the adrenalin-fueled climax.

A DEADLY GAMBLE is available from Amazon.

It’s an unusual scenario to have a hunter also be prey, and at first this seems a challenging turnaround of events – but the logic of a man left to die who survives to gain revenge another day is impeccable, and makes A Deadly Gamble a riveting thriller that evolves from a Las Vegas deal gone awry to a story of revenge and conflict.

Add in the global banking system and its uses and abuses, and an international focus, and you have a story line that sizzles with excitement and which begins in Miami, where a forthcoming marriage of the daughter of a prominent Paraguayan family is halted when deceit is uncovered on the groom’s part by the bride’s protective brothers who send him packing.

At every turn in the story there’s fuel from the banking process, which injects itself into high-stakes stories of confrontation, deception, revenge, and big money. A heartbroken bride pursues her dream in a process that will reach across the world to involve banker Jim Sharkey, a Manhattan businessman whose obsession with his career has ended his family. Drifting towards ruin, he becomes involved in a theft that could lead him away from a dead-end job into a world of wealth. But the theft of funds in the millions is stolen from that prominent Paraguayan family. And they want blood.

As mystery and thriller readers move into a cat-and-mouse game of plots, subplots, confrontations and struggle, they will appreciate Pat Mullan’s ongoing ability to paint a bright path of progress, only to diverge from that path at the last minute in a three-sixty degree turn of events which succeeds in adding different nuances and protagonists.

From Vegas and back again, Sharkey’s involvement with legal and illegal maneuvers and protagonists who aren’t what they seem creates a fluid, ever-changing plot which sweeps readers along on a flowing ride through a series of encounters based on a big company’s secret involvements with Paraguayan crime lords.

Will Jim move from near-poverty to better circles, or will his ambitions result in a deadly gamble that will ultimately end his life? It should be cautioned that this is no simple story line. Readers who enjoy ever-changing twists and turns of story will find it engrossing and satisfyingly complex: a perfect saga for puzzle enthusiasts who might assume Jim’s eventual success, but not how the surprising route to it ultimately takes place.

Pat Mullan was born in Ireland and has lived in England, Canada and the USA. He is a graduate of St. Columb’s College, Northwestern University and the State University of New York. Formerly a banker, he now lives in Connemara, in the west of Ireland.

He has published articles, poetry and short stories in magazines such as Buffalo Spree, Tales of the Talisman, Writers Post Journal. His poetry appears frequently in the Dublin Writers Workshop, Crannog, and elsewhere. His short story, Galway Girl, was short-listed for the WOW Awards and was published in the new WOW Magazine in Galway in April 2010. It is also one of his short stories that form part of his GALWAY NOIR anthology.

He has three collections of poetry available on-line, Childhood Hills, Awakening and Knowing. James Dickey’s Poetry: The Religious Dimension is his elegy to Dickey and is available on-line on Amazon Kindle.

Recent work has appeared in the anthology, DUBLIN NOIR, published in the USA by Akashic Books and in Ireland and the UK by Brandon Books and again in ‘City-Pick DUBLIN’, published by Oxygen Books in 2010 to mark Dublin being chosen as UNESCO’S City of Culture for 2010; and in the anthology NOIR BY NOIR WEST, from Arlen House in 2014.

His first novel, The Circle of Sodom, received two nominations, one for Best First Novel and one for Best Suspense Thriller, at the Love Is Murder conference in Chicago. His second novel, Blood Red Square, was published in the US and a new edition is now available on-line as a paperback and as an ebook. His latest novels, Last Days of the Tiger and Creatures of Habit are now available on-line as ebooks on Amazon Kindle, Barnes & Noble’s Nook, Kobo, and elsewhere; they are also available in paperback.

He is a member of International Thriller Writers, Inc.

Read all about him at: www.patmullan.com