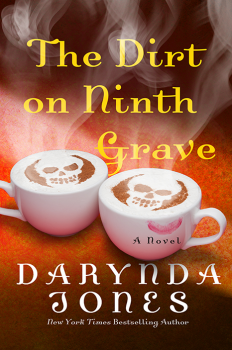 Darynda Jones is into “badassery” (her word, coined, I’m sure just for this interview). If I couldn’t figure that out from the actions and attitude of her protagonist, Charley Davidson, then Darynda’s reverence for Ronda Rousey and Holly Holm was a strong clue. And if I’d missed those, as I am wont to do, there’s Charley’s cherry-red Jeep wrangler named “Misery” (thank you, Stephen King) and the bumper sticker that reads, “If it has tires or testicles, it’s gonna give you trouble.” And, of course, the friendly motorcycle gang with the leader riding “Odin.”

And if I still could miss all of those clues, there’s the number of times she used some derivation of the word “badass” in our chat.

So THE DIRT ON NINTH GRAVE gives Charley another opportunity to practice her own form of badassery. This time (there have been eight others, as the title implies) in a small village in New York where she is living as Jane Doe, a girl with no memory of who she is or where she came from.

Charley begins to realize she can see dead people, and the live ones entering her life seem to know things about her, things they hide with lies and half-truths. She senses a darker force that wants to cause her harm, and finds a friend she feels she can confide in and trust. A devastatingly handsome man whose smile is breathtaking and whose touch is scalding. She almost feels safe with him around, except for the lies.

But no one can outrun their past, and the more lies that swirl around her, the more disoriented she becomes, until she is confronted by a man whose mission is to kill her. Sent by the darkest force, one that absolutely will not stop until she is dead. Thankfully, she has a Rottweiler.

Her quest to find her identity and recover what she’s lost will take all her courage and a touch of the power she feels flowing like electricity through her veins. She will get to the bottom of this if it kills her. Or that handsome liar. Either way.

Of course, she could always have read the first eight books and saved herself a lot of trouble.

The titles of her Charley series intrigued me, and I asked if she hadn’t forgotten a word in this latest one. No, she said, she’d left it out on purpose.

“When I came up with the title, I figured it could be taken either literally or metaphorically, and I was fairly certain I had reached a level of brilliance I’d only aspired to before that fateful moment. Also, I’d downed a lot of Red Bull. And taken Dramamine.” Pressing further, she noted that she’d “had a lot of fun figuring out where to put the graves.”

Another indicator of Darynda’s badass proclivities—she’s originally from Texas. Friona, Texas, to be precise. Population around 2,500 when she was born. The Cheeseburger Capital of Texas, they claim, even though there are only four restaurants where you can get one. But it was the first high school in Texas to integrate, although their women’s team nickname was the Squaws.

She jumped the border, settled in Portales, New Mexico, and started writing there while in high school. Her first work was a post-apocalyptic fantasy where the characters bore an odd resemblance to the members of Van Halen’s band. Written over ice cream at the Tastee Freeze. I can see it now—a Norman Rockwell scene with zombies.

Now, she studies other’s writing, taking a lot from the current crop of quality television dramas.

“I do watch a lot of series. I study them. I study the format, the character arcs, the episode and series arcs, the dialogue, the conflict and how the writers create empathy in the viewers for certain characters. I also study the layers of plots and how they are developed over time. It’s all fascinating and the best writing in Hollywood right now is in television.”

I absolutely agree with her, there. Especially after watching Terminator Genesis. Keeping Up With the Kardashians is better written than that movie. Speaking of movies, Darynda has already cast and re-cast her fantasy Charley movies. Very creatively, I might add. I would quibble with her tossing Kevin Spacey in favor of Billy Burke, but the Marion Cotillard choice was inspired.

I’d like to end this with some Oscar Wilde references. Darynda is a big fan and has a number of his quotes on her social network pages. When I suggested a new one—“Quotation is a serviceable substitute for wit”—she responded with her best street dialect: “I love me some Oscar Wilde!”

She’ll claim it was a typo, but I think not.

New York Times and USA Today Bestselling Author Darynda Jones has won numerous awards for her work, including a prestigious Golden Heart®, a Rebecca, two Hold Medallions, a RITA ®, and a Daphne du Maurier, and she has received stellar reviews from dozens of publications including starred reviews from Publisher’s Weekly, Booklist, and the Library Journal. As a born storyteller, Darynda grew up spinning tales of dashing damsels and heroes in distress for any unfortunate soul who happened by, annoying man and beast alike, and she is ever so grateful for the opportunity to carry on that tradition. She currently has two series with St. Martin’s Press: The Charley Davidson Series and the Darklight Trilogy. She lives in the Land of Enchantment, also known as New Mexico, with her husband of almost 30 years and two beautiful sons, the Mighty, Mighty Jones Boys.

To learn more about Darynda, please visit her website.