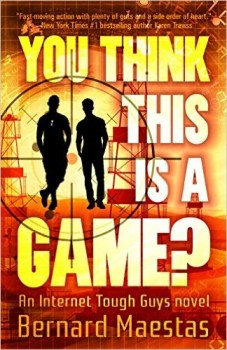 Young adult thriller YOU THINK THIS IS A GAME? is set in the throws of a Somalian energy war, where young mercenaries and tech specialists Ted Reagan and Alex Kirwan join the fray against a massive army of hired guns.

A police officer by day, and writer by night, Maestas is quick to set the record straight about which came first. Surely, it’s being a policemen, right?

“Really, it’s the other way around,” he says. “I’ve been writing my whole life, since I could hold a crayon. I did some short stories in grade school but I also started writing screenplays around the same time as well. I worked on a TV series, played at creative writing with some friends in high school (this I really credit with honing my prose), I’m sure I even wrote fan fiction at some point.”

But Maestas is quick to point out how much he loves his day job. “Being a police officer was high on a short list of dream careers from childhood and I’m fortunate beyond words to have gotten to do it. It is a passion and a calling and, thankfully, I happen to be quite good at it.”

It also feeds his creative muse. Between his day job and keeping abreast of world news, Maestas says he isn’t worried about running out of ideas for his books.

“Something I love about this series is the wealth of potential stories out there,” he says. “Between the headlines and the rumor mill, there’s always some great scenario for private or corporate military, and Alex and Ted are more than happy to profit from it. Add in the ideas I’ve had just from my own experiences, and I’ve got more material than I know what to do with!”

Given that the Internet Tough Guy series features such two bickering best friend characters, it lends the question, is Maestas more like Alex, or more like Ted?

“I have to laugh at this but I am definitely Alex,” Maestas confesses. “More aptly, I think I’m Alex having grown up quite a bit over the last few years. I still have the caustic wit and some of the juvenile attitude and sense of humor, but I’m a little wiser and nowhere near as self-destructive.”

Armed with an Alex-like sense of humor, Maestas blanches at an attempt to get him to pick a favorite scene in YOU THINK THIS IS A GAME?

“Unfair on so many levels,” he says. “It’s hard to pick a favorite because there are so many great scenes in this book. The tanker ship, the street battle, the chopper, the interrogation and escape, they’re all fantastic!”

“But if I could pick only one,” he says, “I would say it was the parkour duel (a first for the series). I remember when the idea popped into my head—it was a mix of ‘Eureka!’ and ‘Oh, of course.’”

A Scrivener disciple, Maestas also packs into his work and writing schedule, martial arts classes, video games, a kickball league, and an overwhelming love of karaoke. He reads Sci-Fi and anything by authors Karen Traviss or Rob Thurman, and credits his love of manga, comic books, and the works of Tolkien and Orson Scott Card as influencers to his work.

Fans of the Internet Tough Guy series can rest assured, even with his busy schedule, Maestas has the series plotted all the way to book five. Aside from YOU THINK THIS IS A GAME? – coming December 15, 2015—he has another title releasing in 2016 entitled, Concrete Smile.

Bernard Maestas lives in paradise. A police officer serving and protecting the mean streets of Hawaii, he has a background in contract security and military and civilian law enforcement. When not saving the world, one speeding ticket at a time, and not distracted by video games and the internet, he is usually hard at work on his next novel.

To learn more about Bernard, please visit his website.