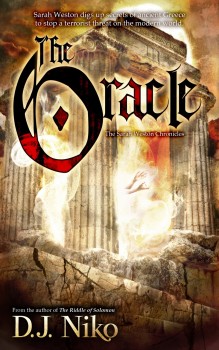 When antiquities are stolen from a museum near Delphi, British archaeologist Sarah Weston and her American partner, Daniel Madigan, are drawn into a deadly plot that goes beyond harmless role-playing—someone is using the Delphian oracle as a smoke screen for an information exchange with devastating consequences to the Western world.

Pitted against each other by the cult’s mastermind, Sarah and Daniel race against time and their own personal demons to uncover clues left behind by the ancients. Their mission: to find the original navel stone marked with a lost Pythagorean formula detailing the catastrophic events that led to the collapse of a legendary civilization. But will they find it in time to stop the ultimate terrorist act?

D.J. Niko’s, THE ORACLE, is the riveting third installment in her popular Sarah Weston Chronicles. This month, the author took a few minutes to talk to The Big Thrill about writing her latest release—and a lot more.

Tell us about THE ORACLE in one line.

A fast-paced thriller with a fascinating glimpse into pagan divination rituals that shaped politics in ancient Greece—and are being resurrected today.

I enjoy the personal approach to marketing. Because I do a lot of research for my books, I have a body of knowledge that I love to share with people, whether they’ve read my books or not. I lecture and teach on my research topics, and that has proven effective in selling books and building a fan base.

What kind of research did you conduct for THE ORACLE?

It takes place in ancient Greece, and since I was born and raised there, I already had a lot of background. I traveled to Delphi several times, which helped me understand what happened there in ancient times and how it could be repeated today. Plus, it helped me build realistic scenes. For one of my characters, I am exploring post-traumatic stress disorder, so I had to speak to a few psychiatrists in order to understand that. And I read a lot of ancient Greek accounts of the Delphic oracle—both in English and ancient Greek!

I have small children, plus I have a full-time job as an editor, so for me, it’s especially difficult to carve out the time. I wake up at 4 A.M. (crazy!) and work while my house is quiet. A lot of my plotting gets done when I’m in the car, especially on long trips. If you don’t have the time, you have to find it.

Cooking is a great meditation for me. I also practice yoga and make killer Lego sculptures with my six-year-old son.

I don’t like self-conscious or pretentious writing. I tend to put those books down right away. Though I write in the thriller and historical genres, I tend to read more literary fiction. I enjoy well-executed language acrobatics more than the story itself.

On my nightstand right now is a stack of books about ancient Egypt during the new kingdom. It’s research for a historical I’m developing.

All the time spent marketing! Before you’re in the game, you fantasize about being able to write all day, but the fact is, you spend more time selling your books than you do writing them.

Keep writing. Keep honing your craft. Hang out with other writers and get your work critiqued. Develop a thick skin. It’s a long road, but it’s the best journey you’ll ever take.

I have another release in May 2016 titled The Judgement. It’s a historical about the fall of Israel’s united monarchy and King Solomon’s empire in the 10th century BCE. 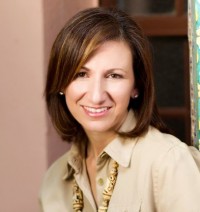 Daphne Nikolopoulos in an award-winning journalist, author, editor, and lecturer. Under the pen name D.J. Niko, she has written two novels in an archaeological thriller series titled The Sarah Weston Chronicles. Her debut novel, The Tenth Saint (Medallion Press, 2012), won the Gold Medal (popular fiction) in the prestigious, juried Florida Book Awards. Her follow-up release, The Riddle of Solomon, continues the story of British archaeologist Sarah Weston as she seeks the relics—and mystical secrets—left behind by the biblical King Solomon in remote Israel.

Daphne’s coming releases include The Oracle, book 3 in The Sarah Weston Chronicles (November 2015) and The Judgment, which is set in Israel and Egypt in the tenth century BCE (May 2016).

In addition to writing fiction, Daphne is editor in chief of Palm Beach Illustrated magazine and editorial director of Palm Beach Media Group. Prior to that, she was a travel journalist who logged hundreds of thousands of miles traveling across the globe, with emphasis on little-known and off-the-beaten-path locales—many of which have inspired her novels.

Daphne frequently lectures about her research on the ancient world. She is an instructor at Florida Atlantic University’s Lifelong Learning Society, teaching on the subject of archaeology. She has also spoken to audiences at the Jewish Community Center of the Palm Beaches’ Academy for Continuous Education, and several libraries and private groups throughout Florida.

Born and raised in Athens, Greece, Daphne now resides in West Palm Beach with her husband and twin son and daughter. You can find her on her website, and connect with her on Facebook (AuthorDJNiko) and Twitter (@djnikobooks).