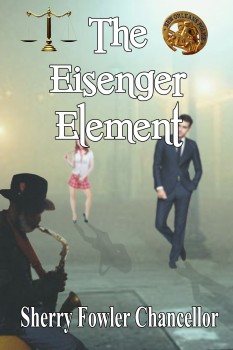 Sherry Fowler Chancellor writes thrillers, romances, and YA novels, and her latest thriller offering, THE EISENGER ELEMENT, follows a determined young detective, Emilia Hammond, on her first assignment with the New Orleans Police Department, determined to prove herself capable and worthy of her shield.

Sherry Fowler Chancellor is a lawyer by day and writer, amateur photographer, and history buff by night. She lives on the beautiful gulf coast of Florida and loves her little slice of paradise.

Sherry, could you give us the “elevator pitch” to the story?

A Garden District lawyer and a New Orleans detective with a shiny new gold shield collide at the scene of a murder.

I understand you developed the essence of the book during NaNoWriMo in 2013. How did you discipline yourself to that challenge?

THE EISENGER ELEMENT was my NaNoWriMo story for 2013. I’ve participated and won every year since 2009. I love it. The mad dash to the finish line motivates me. I get excited to update my word count and watch that graph move along. I’m a lawyer in my day job and it’s pretty hectic there, too. I seem to thrive on the pressure. I do a lot of lunch hour writing and use the weekends to really up the word count.

Did you change the story much during the editing?

I actually didn’t change much on this story after I submitted it to the publisher in May of 2014. I finished the first draft during NaNoWriMo and polished it for a few months afterward but once I turned it in, I waited for the edits and made just the editorial changes as suggested.

Tell us about Emilia Hammond. What will intrigue the reader about your heroine?

She’s pretty awesome. She’s sassy and confident in her role as a cop but not so much as a new detective. Street savvy and irreverent, she’s the quintessential New Orleanian. She takes no flak and speaks her mind. Her fun quirk is to give people nicknames that fit at the moment she’s talking to them.

And with Lincoln Eisenger, is there more going on than meets the eye?

There is much more to Linc than meets the eye. He’s complicated and aggrieved about his brother being in prison. This man is determined and hard-headed but actually has a gentle soul. I quite adore him.

What other characters or situations might the reader encounter?

There’s a young runaway who plays a big part in the story. Emilia comes from a large family of cops and her partner and she have a great give and take. They were a blast to write. The banter was a lot of fun. Emilia’s best friend is a Tarot card reader and Linc meets some fun older ladies at the Angola rodeo. So, while the story is serious, there’s a lot of humor and wit woven into the tale.

You’ve set the novel in New Orleans, itself a very strong character. What made you choose this locale?

Let me just say, I love, love, love that city. I live 2.5 hours away and it’s a frequent destination for me. It’s such a unique place. There’s an ethos there like no other. The spirit of the people and their uniqueness can’t be duplicated. It’s funny that you call it a character because that is exactly what it is. I even state that in my acknowledgements in the book. It’s a place that crawls inside your imagination and runs rampant. From the Quarter to the Garden District and from Uptown to the Magazine Street galleries, the character of the place runs the gamut from crazy to sophisticated to poverty (sadly). You can find all the conditions of humankind in New Orleans.  And we can’t forget the West Bank where Algiers lies. I made Emilia hail from that side of the river and Linc from the Garden District. A comparison of their upbringings, so to speak.

You’ve written romance and YA stories in the past…

I also write under a pen name of Jillian Chantal. I’ve written romance under that name for a while but am moving back toward using my real name. I am all over the board on what I like to write but there is usually an element of mystery or a dead body—or four—in most of my tales. I’ve always said I want to be Agatha Christie when I grow up.

So what made you decide to go with a thriller this time around? Is there anything you’ve found challenging about writing different genres?

I can’t really say what makes me decide what to write but this story was inspired by the Herman’s Hermits song, Leaning on the Lamppost (I listen to oldies!). In fact, in the first scene, Linc is leaning on a lamppost waiting for a young lady he thinks is an underage prostitute (whom he wants to help out of the life) but later finds out is Emilia working undercover. I don’t really plot in advance so when I started this, I had no idea where it would go.

What is one thing that most readers don’t know about you?

I’ve been skydiving and I am a roller coaster hound- I love to go fast and upside down. Interestingly enough, though, I get car sick in the back seat. Really, horribly sick. There. I’ve said it. It’s out there.

Did anyone or anything motivate you to become a writer?

I’ve always loved to read and cut my teeth on Sir Arthur Conan Doyle and Agatha Christie. I wrote some short tales as a kid.  As an adult, I returned to my love of story-telling when I would find myself not being able to turn off the day job stress. It’s a great way to de-stress. I didn’t seek publication for several years as it was my private fun but when I showed my work to friends, they encouraged me to get it out there.

What do you do to market your books and stay in touch with readers?

I blog and do book signings as well as attend reader events. I’m a Facebook fan as well. If a reader emails me, I always respond. I keep meaning to start a newsletter and that is definitely on the to-do list.

What’s the next project–a sequel perhaps?

I have another book coming out with Black Opal Books called Till Murder Do Us Part. I’m awaiting second edits on it. It’s a bit of a thriller itself.

It’s set in my hometown of Pensacola so it’ll be neat to have this one go live. Many of the scenes are set in local places such as our historic cemetery, Ft. Pickens, and the awesome Pensacola beach. 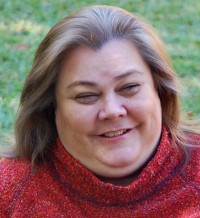 Sherry Fowler Chancellor is a lawyer by day and writer, amateur photographer and history buff by night. Jillian lives on the beautiful gulf coast of Florida and loves her little slice of paradise.