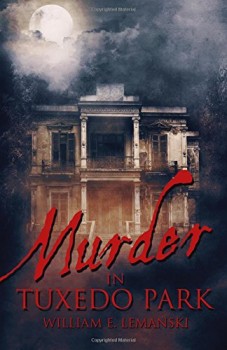 Lemanski is a Vietnam combat veteran, with an engineering background in the nuclear power industry. Since retiring from both the New York Power Authority and Entergy Nuclear Northeast, he’s worked as a freelance journalist in the Hudson Valley of New York, held public office as a councilman, and served as a police commissioner in the Town of Tuxedo, New York.

When not researching new book material, he spends time traveling the world on various big-game hunting expeditions. He is also the author of two other books, Adventures in Distant and Remote Places: A Memoir, and Lost in the Shadow of Fame: The Neglected Story of Kermit Roosevelt A Gallant and Tragic American.

This month, he spoke to The Big Thrill about the inspiration behind his newest release.

Tell us about MURDER IN TUXEDO PARK.

The story is in the spirit of a Conan Doyle, Victorian-era murder mystery. The venue is the wealthy, gated community of Tuxedo Park, New York in the latter 19th Century, where a deranged serial killer begins knocking-off some of the residents. The protagonist is a very eccentric and wealthy doctor residing in the Park, who is also an engineer. His esoteric interests include the workings of the brain and the mysterious motivations that drive criminals to commit their evil deeds. During his research at the Sing Sing penitentiary, he meets a comely young woman who is also studying murderers there for her doctorate thesis in psychiatry. However, they have distinct differences in theory regarding murderous motive. They team-up to find the killer while also falling in love.

Their many harrowing adventures and near misses take them to Africa and back, and through a court case as they pursue their elusive quarry.

What was your inspiration for writing the eccentric main character James I. Montague-Smith, aka Monti.

He’s a little of Sherlock Holmes and part Alfred Loomis, who was a real-life, very wealthy resident of the Park during the first half of the 20th Century. Although a Wall Street lawyer and investor, Loomis was also a brilliant amateur scientist who befriended many of the shining lights of physics, such as Niels Bohr and Albert Einstein. Loomis worked with the early developers of radar, via experiments pursued in his mansion’s laboratory in the Park, similar to Monti’s. As an avid yachtsman, Loomis’s wealth even enabled him to purchase Hilton Head Island before it became a tourist destination.

You’ve written two non-fiction books as well, one of which is Adventures in Distant and Remote Places: A Memoir telling about your life travelling the world as a soldier, sailor and hunter. How has your adventurous life affected your fiction writing?

I guess I have pursued various offbeat adventures throughout my life because at heart I’m really quite a romantic character. Hence, I’ve always enjoyed a good adventure story. MURDER IN TUXEDO PARK is certainly a murder mystery, but also an adventure tale. My travels in the African bush and interacting with its indigenous people were a benefit in adding realism to that segment of the story.

Of the various things you’ve done in your life what one or two things stick out the most in your mind as life altering, or having guided you to the place you are now?

Certainly the Vietnam War has impacted my life in various ways. Regarding my public writing today, in my former engineering career, I authored many specifications, reports, technical papers, etc. During those years I developed a degree of skill with the written word, a skill that I have continued in my retirement, just in a different context. I look upon writing words as I used to see a drafting board and pencil. Both are tools enabling me to convey ideas and concepts to others, one tool, the word in sentence structure, and the other in diagrammatic or picture form. I see both as similar communication mediums enabling me to convey my creativity to others.

If you could go back and change anything in your past what might that be?

Oh, that’s a tough one! Similar to Monti, I’ve never found a diversion I wouldn’t or couldn’t get interested in. To start again, maybe I’d pursue a career as an anthropologist. Having lived for a time with Eskimos, American Indians, African natives, etc., I have loved learning about different cultures.

What advice would you give to a young person setting out in life?

Be tenacious in following your passion and most importantly, develop a strong curiosity about the world and everything around you.

William E. Lemanski is a Vietnam War veteran, a retired engineer in the nuclear industry, a former Town of Tuxedo Councilman and Police Commissioner, a journalist, author of two books, a lecturer and big game hunter.