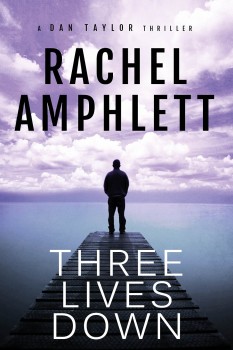 Dan Taylor has survived two attempts on his life. The rest of his team are missing, and now a terrorist group has stolen a radioactive isotope from a top secret government project.

Can Dan survive long enough to prevent a nuclear disaster on British soil?

With the Prime Minister determined to re-negotiate the country’s place in the European Union, and deals being struck behind closed doors, Dan stumbles across a plot that will shake the country to its core.

If his mission fails, his enemies will overthrow the British government, and Dan will be a wanted man.

If he wants to succeed, he’ll have to sacrifice everything.

THREE LIVES DOWN is available from Amazon, iTunes and Kobo.

Praise for the Dan Taylor series:

‘Rachel Amphlett has given us Dan Taylor and a series that is headed to the top of the class. It reminded me of Clive Cussler’s books starring Dirk Pitt who is a hero to many’ – Readers’ Favorite

Before emigrating to Australia in 2005, Rachel Amphlett helped run a pub, played lead guitar in bands, worked as a TV and film extra, dabbled in radio as a presenter and freelance producer for the BBC, and worked in publishing as a sub-editor and editorial assistant.

After returning to writing, Rachel enjoyed publication success both in Australia and the United Kingdom with her short stories. Her first thriller White Gold was released in 2011, with the Italian foreign rights for the novel being sold to Fanucci Editore’s TIMECrime imprint in 2014.

In her spare time, she enjoys skiing, horse-riding, playing guitar, reading (of course), and writing (another no-brainer). She also has a great love of films, especially thrillers, rom-com, sci-fi and biopics. She doesn’t mind admitting she’s scared of horror films.