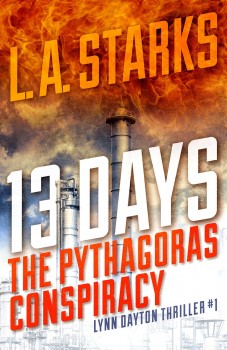 Energy executive Lynn Dayton thinks her challenge is fixing the troubled Houston Ship Channel refinery her company has just acquired. But soon she must save it and other refineries, from the industrial havoc and deaths directed by a French saboteur, simultaneously fighting off threats to her own life.

As Lynn deals with chemical leaks, disloyal employees, a new season of hurricanes, and mounting casualties, Robert Guillard, a corrupted idealist, plans to manipulate her through her vulnerable sister.

But Robert underestimates his prey.

“A knockdown conspiracy. Starks has made an impressive debut with the command, passion, and insight of an insider.” –Michael Lucker, executive producer, Lucky Dog Filmworks

13 DAYS is available from Amazon, Barnes & Noble and Smashwords.

Rating: Excellent “Author L A. Starks delivers an unstoppable thriller that put this reviewer in mind of bestselling novels of this genre over the last several decades, with the welcome addition of depth… When the reader turns the final page of 13 DAYS: THE PYTHAGORAS CONSPIRACY, it will be with an understanding and education gleaned smoothly and without strain or difficulty. This is truly a book which will linger in the reader’s mind long after the final ending, as we wonder: “What if?” … 13 DAYS: THE PYTHAGORAS CONSPIRACY is a thriller whose potentials are altogether too probable to ignore.”—Annie, Euro-Reviews

“The characters are well developed, the plot twists are interesting, dialogue sharp and well crafted… I want to read more Lynn Dayton stories… If you are into thrillers, you will like 13 DAYS: THE PYTHAGORAS CONSPIRACY.” –Beth, Pure Textuality

“Wow…I loved the whole plot because I found it to be unique. The characters were very realistic and I loved how the story is told from both the protagonist and villain’s point of view.” –Tina Chan, reviewer, The Book Landers

“13 DAYS is a cross between Vince Flynn and Patricia Cornwell.” – reader

“This was a very fast-paced book! I couldn’t put it down! It is a superb blend of the oil business, current events, and international intrigue. I felt like I was experiencing a front-page news story.” –Kathy, international executive

5 Stars. “I pulled the book out this week and haven’t been able to put it down. The story is well written with personal crisis, drama, suspense, and just a touch of a romantic struggle. The characters are well developed. I am anxiously awaiting a sequel by L.A. Starks.”–Sonia

“13 DAYS: THE PYTHAGORAS CONSPIRACY is a well-done industrial espionage and terrorism thriller about the global oil industry that along the way provides a fascinating look into the technology, politics, and vulnerabilities of this all-important sector of the world economy.” –William, telecommunications executive

5 Stars. “13 DAYS takes readers on a fast paced ride into the world of petroleum. I would describe this book as espionage, thriller, suspense and entertaining. The quality of the plot and character make it difficult to believe this is a debut novel. The characterization is exquisite. The plot is exciting and informative.”- -Readers Favorite

L. A. Starks is an energy economist and the author of the Lynn Dayton thriller series. Strike Price, the second in the Lynn Dayton series, won the Texas Association of Authors’ First Place Award for best mystery/thriller. She is also multipublished in nonfiction. Starks was born in Boston, Massachusetts. She grew up in Oklahoma, went to school in New Orleans and Chicago, and now lives in north Texas. Her current favorite destination is Palo Alto, California.