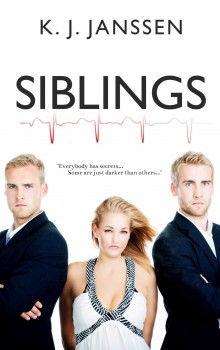 Marilyn Symington strives to be a good mother and the family peacemaker,
but when lingering health issues send her to her husband’s business partner Dr. John Hazleton, she is drawn into an illicit relationship which threatens
the foundation of everything she’s built.

Ronald Symington is a well respected doctor, but he is burdened by problems at the Symington Medical Center and growing family friction, with only the apparition of his late father to rely on for advice. Looking for leverage, Ron hires a PI to investigate his uncooperative partner, but what will he do with
the shocking secret he discovers?

Richard, the oldest of the Symington offspring, followed Ronald into medicine,
but he can’t escape living in his father’s shadow. He also has a secret gambling addiction which leads him into performing illegal abortions to pay off his debts,
though he tries to convince himself that he’s helping his patients—prostitutes—by saving them from back-alley butchers.

Wilson, is a true middle child, lost in the shuffle, fighting for recognition and approval and always feeling that he is coming up short. After falling in with
drug dealers and spending time in prison, he is now seeking redemption by secretly working with the FBI to catch the real offenders.

Maggie, the youngest is a Registered Nurse, but she is always looking for something more, something, exciting. She and her lover experiment with exotic drugs and sexual fantasies, until one particular fantasy turns terrifying, forcing her to reexamine her priorities.

Can the damaged family which found its wealth and social standing in medicine somehow heal and find peace?

Or are their sins numerous and egregious to forgive?

SIBLINGS is available from Amazon.

5-Stars
INTENSE DRAMA AND SUSPENSE
By Love2read on September 2, 2015
Intense drama and intriguing characters blend into an intricate storyline in K.J. Janssens “Siblings.” Every family has secrets, and what we refer to as the “black sheep,” however the prominent Symington family has dark desires, secrets, and problems extending far past the normal expectations of the average family unit. Dr. Ronald Symington is more adapt at running his medical center than his family, yet problems arise within, involving his partner Dr. John Hazelton. Marilyn Symington seeks medical attention from Hazelton, and possibly a more intimate relationship as well. Young Richard is also a doctor but does not measure up to his father’s reputation or financial expectation. Feelings of inadequacy spur his addiction to gambling, and then as to performing abortions to pay off his debt.

Wilson Symington is a truly unique young man that falls into a life of crime and drugs, and then tries to redeem himself by working to capture the drugs lords who are a horrendous threat to the lives of many.
The youngest sibling Maggie, is a nurse, yet she craves more excitement and thrills in her life. She finds these thrills in drug use and sexual fantasies, with a terrifying result.

A family smothered in traumatic despair. Deep and dark secrets revealed. Siblings fighting not only for recognizance, but for their unity of their family…and their very lives. Intense, suspenseful, sexual exploitations, and deception, “Siblings” is the American dream gone drastically wrong. I look forward to reading more from this invocative author, as I’m sure his other books are just as intriguing.

5 STARS
SIBLINGS BY K J jANSSEN
By Laverne on October 2, 2015
Well K.J. Janssen has captured my attention again with his new Paperback “Siblings”. Siblings’ really covered a lot of what goes on behind the closed doors of the Medical Profession. It also shows you how the children raised by the same parents took completely different routes in their lives. One being an obsessive gambler, another doing Illegal abortions and yet another being vindicated from a crime he got caught up in. It also hit upon a subject that is currently in our headlines today regarding Abortion and Planned Parenthood. It held my attention and the outcome of the book was surprising and inspiring. I am looking forward to K.J. Janssen’s next book.

Ken is a multi-genre novelist living in Ohio, with his wife and miniature Schnauzer.

Fatal Dose, the second Mark Matthews Mystery exposes a drug mafia distributing counterfeit prescription drugs and revisits some of the villains from Blood Money. It was published March, 2013.

Family Matters is a multi-genre work about three generations of the Kingston family. The protagonist, Adam Kingston, provokes each of the main characters with a series of ruthless actions until one is driven to hire an assassin to kill both Adam and his father and burn Kingston Manor to the ground. It was published March, 2015.

Siblings, is a captivating thriller and introspective of the hierarchy in sibling families. Gambling, drugs and infidelity are rampant in this tale of the Symington family. It iwas published in August, 2015

The Keys to the Kingdom is a about a modern day Everyman, It introduces a way to enter the Kingdom of God on earth.

Ken is a member of ITW and INTA