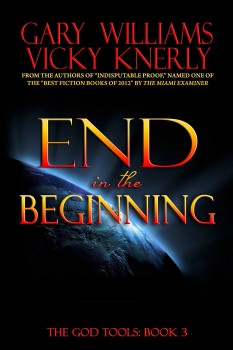 In the final chapter of The God Tools trilogy, the future of mankind hangs in the balance when Dr. Curt Lohan learns of the Cult of the End’s plan to destroy humanity. In desperation, he and Fawn Cortez-Roberson, along with help of CIA analyst Tiffany Bar, embark on a harrowing search to locate the third God Tool and save their friends. A journey fraught with peril leads to a bizarre torture chamber, an ancient underground tomb, and a pristine land unchanged by time where Curt must confront an unimaginable evil: a dark and deadly presence rooted in the dawn of man.

With the God Tools in the wrong hands, Curt has but one chance to save his friend Scott Marks, rescue the children known as the seeds, and avert the agonizing death of every person on the planet. To do so, he will be forced to make the ultimate choice. Will it be enough?

END IN THE BEGINNING is available from Amazon.

Gary Williams lives in St. Augustine, Florida, with his wife. Williams has a bachelor’s degree in Business Marketing and writes full time. His hobbies include historical research, fishing, and watching football.

Vicky Knerly is a native of Syracuse, New York, and resides on St. Simons Island, Georgia. Knerly has a bachelor’s degree in English and two masters’ degrees. She has won awards for her research-based writing, and works for a private university based in Melbourne, Florida, where she also teaches as an adjunct professor.

In 2009, Williams and Knerly formally partnered as co-authors.