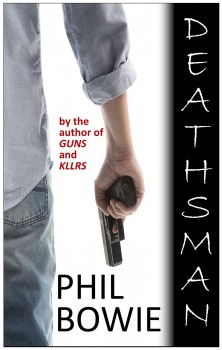 John Hardin is the WITSEC identity of a pilot who runs a small aerial photography business flying his Cessna out of Asheville, North Carolina. He’s restoring a log home overlooking the great Smokies village of Maggie Valley, and does home repairs on the side. He shares his place with octogenarians Hank and Hattie Gaskill, escapees from a depressing rest home, and he has an independent Cherokee girlfriend, Kitty Birdsong, who rides her own lipstick-red motorcycle.

Brandon Doyle, a burly biker friend of theirs, runs afoul of a drug lord who sells synthetic analogs of cocaine, heroin, and ecstasy. John and Kitty try to help Doyle, but become embroiled themselves in a mortal struggle against the drug kingpin and his legendary hit man named after those executioners of centuries past, the travelling professional beheaders and hangmen known as the deathsmen.

DEATHSMAN is available from Amazon.

This suspense series has been endorsed by best-selling authors Lee Child, Ridley Pearson, and Stephen Coonts.

Phil Bowie is a lifelong freelance writer with 300 articles and short stories published in national magazines including The Saturday Evening Post, Reader’s Digest, Harper’s, Overdrive, MAKE, and a variety of boating and aviation publications. He has a collection of his short stories available on Amazon, including several tales previously published, and an award-winning story begun by Stephen King.

Phil lives in eastern North Carolina where he’s at work on his next novel and several short stories.
Visit him at www.philbowie.com