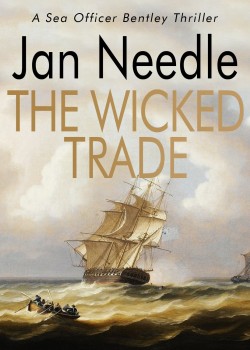 Coming from a family that is neither rich nor powerful, William Bentley – introduced in A Fine Boy for Killing – is forced to resume his career in the British Navy despite his horrific experiences in the bloody mutiny on the frigate Welfare caused by his psychopathic uncle Captain Daniel Swift.

Refusing to serve with Swift again, he joins the Press tender Biter, commanded by the effete and wealthy ‘Slack Dickie’ Kaye. Luckily, Will’s fellow officer Sam Holt turns out to be a courageous friend. Riding through the night to join the tender, they save two young women from a vicious mountebank, who has already torn out the teeth of one of them and sold them to planted in the gums of a rich woman.

When the Biter is reassigned as part of the effort to combat smuggling – The Wicked Trade – the friends become entangled in the investigation of the horrendous murder of two Customs officers. And Will Bentley falls in love with Deb. He has saved her life, but she is still under constant and increasing threat.

Already stripped of innocence by his terrible experiences on the Welfare, Bentley finds his new life in the universally reviled Impress Service teaches new and bitter lessons about greed and corruption. But it is also a journey into loyalty and love.

THE WICKED TRADE is available from Amazon.

:
‘A fresh voice in maritime fiction…gritty, realistic, thoroughly entertaining. [Needle] does not flinch from…the uglier aspects of life aboard a man-of-war…just one of the reasons his work stands out from the crowd.’ – James L. Nelson, author of the Brethren of the Coast trilogy.
‘Rich, compelling characters and vivid imagery. There are no white knights here and no one-dimentional villains.’ – Publishers Weekly.

Jan Needle was born in Portsmouth, England, and started writing about the sea as junior naval correspondent on his local paper. Starting with short stories, he moved to novels, then wrote for TV, radio and the stage. At thirty he was writing thrillers, noted for their unflinching examinations of viciousness and cruelty, and his first historical sea book, A Fine Boy for Killing, was described by one critic as ‘Jack Aubrey with the gloves and rose-tinted spectacles torn off.’ This is the second novel about William Bentley, with three more on the way.