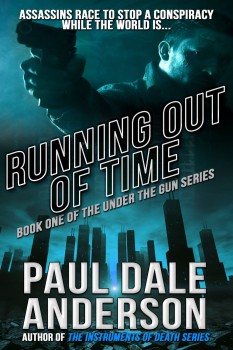 John Morgan is a hired assassin. John, 42, is employed by Sam Adams, a retired military and CIA operative who now owns a private security firm in Franklin Park, Illinois. When John is targeted for assassination in a parking garage at O’Hare Airport, he has no time to think. He responds automatically, twenty years of intense training activating muscle memory, and he takes weapons away from the twelve assassins and kills them all in a life-and-death shoot-out. John survives despite overwhelming odds, a debilitating shoulder wound, and surveillance by persons unknown who hacked into the Chicago Police Department’s security camera network. While John is recuperating from shoulder surgery at the company’s private clinic, two additional teams of assassins destroy Sam Adams’ company headquarters in an old factory building a block away from the clinic and then attack the clinic. Sam and 43 other company employees were in the building when it exploded. Despite being weak from loss of blood and woozy from the effects of morphine, John and another assassin, code-named Jimmy Carter, travel across country in a desperate attempt to thwart a conspiracy that could destroy the world.

RUNNING OUT OF TIME is available from Amazon.

Paul Dale Anderson has written more than 27 novels and hundreds of short stories, mostly in the horror, fantasy, and science fiction genres. Paul has also written contemporary romances, mysteries, and westerns. Paul is an Active Member of SFWA, HWA, and Authors Guild, and he was elected Vice President and Trustee of Horror Writers Association in 1987. He is a current member of International Thriller Writers and a former Active Member of MWA.

Paul has taught creative writing at the University of Illinois at Chicago and for Writers Digest School. He has appeared on panels at Chicon4 and Chicon7, X-Con, Windy Con, Madcon, Minncon, the World Horror Convention, and the World Fantasy Convention. Paul was a guest of honor at Horror Fest in Estes Park, Colorado, in 1989. He is currently the chair of the 2015 HWA Stoker Awards Long Fiction Jury.