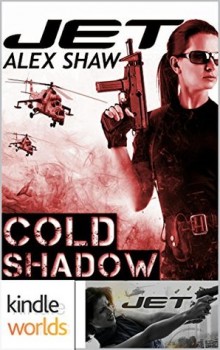 When a Mossad traitor is located in rebel controlled Eastern Ukraine, running an illegal interrogation center, JET – Mossad’s most lethal operative – is tasked with his elimination.
Posing as a Kremlin sponsored journalist, Jet travels with a Russian convoy into insurgent controlled Donetsk.

The convoy is attacked…

Who are the assailants?

Has her cover been blown?

Can she still complete the mission?

But Jet is not the only asset in the area. MI6 have sent in their most trusted agent – Aidan Snow – on a deniable operation to rescue a British Muslim student, held hostage in Donetsk.
Unbeknownst to Mossad or MI6, their missions will merge as the pair of intelligence operatives join forces against the Russian backed insurgents of the Donetsk Peoples Republic.
Outgunned and outnumbers, Jet and Snow are forced to fight their way through and out of Donetsk before Russia closes its new iron curtain.

Two agents, two missions, together they make one hell of a team.

Alex Shaw spent the second half of the 1990s in Kyiv, Ukraine, teaching Drama and running his own business consultancy before being head-hunted for a division of Siemens.

The next few years saw him doing business for the company across the former USSR, the Middle East, and Africa. He is a full member of the International Thriller Writers organization (ITW) and the Crime Writers Association (CWA). His Aidan Snow thrillers were nominated in the ITW Awards ‘Best Original eBook category’ in both 2014 and 2015.

Alex, his wife and their two sons divide their time between homes in Kyiv, Ukraine and Worthing, England. Alex can be followed on Twitter: @alexshawhetman