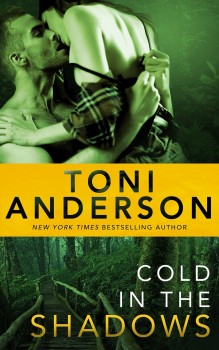 CIA Agent Patrick Killion is on a secret mission to hunt down the ruthless female assassin hired to kill the Vice President of the United States. The trail leads him to the Colombian rainforest and an earnest biologist, Audrey Lockhart, whose work on poison dart frogs gives her access to one of the deadliest substances on earth—the same substance used to murder the VP.

When Audrey is attacked by the local drug cartel, Killion steps in and hustles her out of harm’s way, determined to find out what she knows. His interrogation skills falter somewhere between saving her life and nursing her back to health as he realizes she’s innocent, and he ends up falling for her. Audrey has a hard time overlooking the fact that Killion kidnapped her, but if she wants to get her life back and track down the bad guys, she has to trust him. Then someone changes the rules of their cat and mouse game and now they’re the ones being hunted—by a cold-blooded killer who is much closer than they think.

COLD IN THE SHADOWS is available from Amazon, iTunes and Kobo.

New York Times and USA Today international bestselling author, Toni Anderson, writes dark, gritty Romantic Suspense with over half a million books sold. Her novels have been nominated for the prestigious Romance Writers of America® RITA® Award, Gayle Wilson Award of Excellence, Daphne du Maurier Awards for Excellence, Book Buyers Best, Aspen Gold, and National Readers’ Choice Awards in Romantic Suspense. She has taken home the New England Readers’ Choice Award, and the National Excellence in Romance Fiction Award for Romantic Suspense. Some of her books have been translated into German & Romanian.

A graduate of Marine Biology from the University of Liverpool, and the University of St. Andrews, Toni was a Post-doctoral Research Scientist for several years, and travelled the world with her work. After living in six different countries, she finally settled in the Canadian prairies with her Irish husband and two children. Now she spends her time talking to the voices in her head and making things up. Toni has no explanation for her oft-times dark imagination, and only hopes the romance makes up for it. She’s addicted to reading, dogs, tea (never travels without it), and chocolate. She loves to hear from readers.

Toni donates 15% of her royalties from EDGE OF SURVIVAL to diabetes research–to find out why, read the book!

Toni’s next release will be the fifth book in her bestselling Cold Justice Series, Cold In The Shadows.