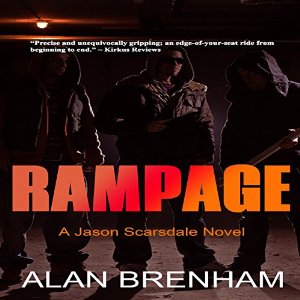 The stakes soar for Scarsdale, both professionally and personally. Sensing that his new partner, the attractive divorcee Tatum Harper, could be trouble in more ways than one, will he be successful in running her out of Homicide? Will their partnership destroy his romantic relationship with long-time girlfriend Dani Mueller? Will they both survive their harrowing face-off with the increasingly unhinged gang leader?

“This gritty crime thriller is an absolute gift to fans of the genre…[a] tale of murder, Texas style…”
BestThrillers.com

“…a promise of chaos and confrontation which doesn’t disappoint.” Midwest Book Review

RAMPAGE is available from Amazon and Audible.

Alan Behr served as a law enforcement officer and criminal investigator for over 17 years before earning a law degree from Baylor University. After obtaining his law license, he worked as a prosecutor and, later, as a criminal defense attorney. He retired from government service and began writing crime fiction novels. He’s authored three crime novels – Price of Justice, Cornered, and Rampage – under the pen name of Alan Brenham. He is presently working on his next novel, a psychological mystery-thriller. Alan and his wife live in the central Texas area.