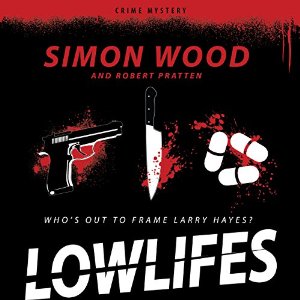 San Francisco Detective Larry Hayes thinks he’s hit bottom when he wakes up in an alley after a bad trip with no memory of the last four hours. This is only the beginning of his problems. Two blocks away, Hayes’ informant, a homeless man named Noble Jon, lies dead, beaten and stabbed. The eerie pangs of guilt seep into Hayes. Is he Jon’s killer? The mounting evidence says so. Hayes mounts his own investigation to stay one step ahead of murder charge and disappears amongst the city’s homeless community.

“Simon Wood has created a terrific pulp-fiction piece that reminds us just how easy it is to fall off life’s tightrope.”
— SJ Rozan, Edgar Award-winning author

LOWLIFES is available from Amazon, Audible and iTunes.

“Inspector Hayes, a complex, likable cop, finds himself in a world of trouble. LOWLIFES grabs you on the first page and is nonstop action to the end”
— L.J. Sellers, author of the bestselling Detective Jackson mysteries

“What Simon Wood has done with LOWLIFES is a whole new take on the reading experience. The thriller is riveting in and of itself, but partnering it with videos that provide another lens on the story was nothing short of brilliant.”
— Michelle Gagnon, author of KIDNAP AND RANSOM

“Simon Wood’s inventive and original LOWLIFES takes you on a tour of San Francisco no tourist gets to see. The ride’s as thrilling as a high-speed chase down Lombard Street, and just as twisty. Don’t miss it!”
— Kelli Stanley, author of CITY OF DRAGONS