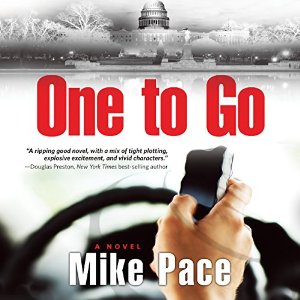 Texting while driving, a young lawyer causes the death of four children including his own daughter. He’s given a chance to “re-wind” the scene and save the children— all he has to do is instead kill someone, anyone in a “soul exchange” for each of the children saved. He now must somehow turn himself into a serial killer or his daughter and the others will die. And the clock’s ticking …

ONE TO GO is available from Amazon.

Born in Pittsburgh, Mike received an art degree from the University of Illinois, and a law degree from Georgetown University where he served on the editorial board of the Georgetown Law Journal. He’s worked as a federal prosecutor in Washington, an inner-city school teacher, and a commercial litigator. He lives on the Chesapeake Bay with his wife and two dogs, Blueberry and Scout.