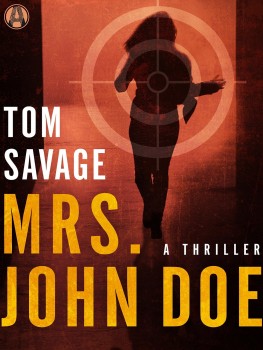 In the adrenaline-laced new novel of suspense from Tom Savage—hailed by Michael Connelly as “a master of the high-speed thriller”—an American actress in Europe races to find the truth behind her husband’s mysterious accident. What she uncovers makes her the target of a shocking conspiracy.

Nora Baron’s life is perfect. She lives on Long Island Sound, teaches acting at a local university, and has a loving family. Then one phone call changes everything. She’s informed that her husband, Jeff, has died in a car crash while on a business trip in England. Nora flies to London to identify the body, which the police have listed as a “John Doe.” When she leaves the morgue, a man tries to steal her purse containing Jeff’s personal effects. Clearly, all is not as it seems.

At her hotel, Nora receives a cryptic message that leaves her with more questions than answers. She follows the message’s instructions to France, where a fatal encounter transforms her into a fugitive. Wanted for murder, on the run in a shadowy landscape of lies, secrets, and sudden violence, Mrs. “John Doe” must play the role of a lifetime to stay one step ahead of a ruthless enemy with deadly plans for her–and for the world.

“It isn’t easy to blindside a fellow suspense author, but Tom Savage manages to fool me every time. A clever, compelling, and cinematic page-turner in which nothing is as it seems, Mrs. John Doe opens with a twist I didn’t see coming and closes with a satisfying bang. This longtime Savage fan ranks Mrs. John Doe right up there with Precipice.”—WENDY CORSI STAUB, New York Times bestselling author of The Black Widow

Tom Savage is the author of seven previous novels and numerous short stories. His books have been published in fifteen countries, and his bestselling novel Valentine was made into a Warner Bros. film. Raised in St. Thomas, Virgin Islands, he now lives in New York City, where he worked for many years at Murder Ink®, the world’s first mystery bookstore.