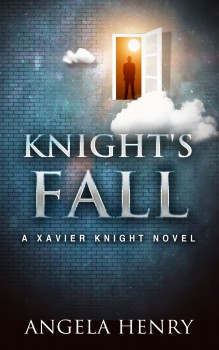 Xavier Knight was an angel—until Heaven kicked him out. Now he’s a private detective in New Orleans, trying to put his old immortal life behind him while avoiding Lucifer’s bounty hunters. But when his latest case uncovers a plot to end the world with a supernatural drug, he’ll need all the otherworldly help he can get to stop it. An apprentice mage on the run, a nosy storefront psychic, a vial of angel blood, and a surly cherub are hardly the stuff of legends. But they’re all he’s got.

KNIGHT’S FALL is available from Amazon.

Angela Henry was once told that her past life careers included spy, researcher, and investigator. She stuck with what she knew because today she’s a mystery writing library reference specialist, who loves to people watch and eavesdrop on conversations. She’s the author of five mysteries featuring equally nosy amateur sleuth Kendra Clayton, as well as the thriller The Paris Secret, and Knight’s Fall, her first urban fantasy novel. She’s also the founder of the MystNoir website, featuring African-American mysteries. When she’s not working, writing, or practicing her stealth, she loves to travel, is connoisseur of B horror movies, and an admitted anime addict. She lives in Ohio and is currently hard at work trying to meet her next deadline.