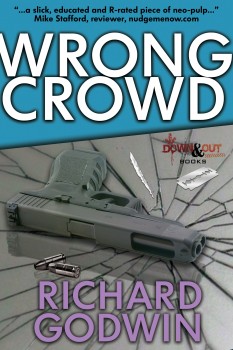 Here’s what I did after finishing Richard Godwin’s newest novel, WRONG CROWD: I immediately sent an e-mail to Eric Campbell, the head of Down and Out Books, and thanked him for publishing it. WRONG CROWD is uncompromising and brutal, and I have to imagine other publishers would be hesitant to sell it. But Godwin’s prose is so beautiful, particularly in its patience and timing, that you can’t help but admire it as you read, even as he takes you through the dark emotions and rough scenes other writers avoid.

I’d never read Godwin before, although I had come across his name; writers I admire had expressed their respect for him and, like them, I’m determined to read everything else he’s written. But prior to starting his other work, I had the chance to ask him a few questions for The Big Thrill about his views on violence, art, and what he plans to work on next.

You don’t shy away from the cruelty of violence, but you don’t glamorize or celebrate it. Is there a “code” that defines your approach to writing about violence?

I try to be realistic. Violence is ugly and effective, it exists at all levels, from the street right through to politics—accurate description is necessary, mollifying the blows is more glamorization than accurate representation, and a form of making it palatable, which may ultimately be a way of encouraging the aspiration towards violence. I am writing about the Russian Mafia. That is hard core and I wrote it hard core.

You don’t seem terribly concerned about making your characters overtly empathetic—they’re engaging enough to follow to the end of the book, but their dark sides are pretty dark. Have you ever faced resistance to that approach from publishers, agents or readers?

Of course. But I battle for verisimilitude.

I noticed references to other art in this book, particularly painters. What contemporary artists (outside of literature, but in any other medium —TV, painters, etc.) inspire you?

Contemporary artists, not many, but open a discussion about Caravaggio and the Italian Renaissance and you have me talking non-stop for an hour. For authors, right now James Lee Burke is the major league heavyweight of the crime writers, and in music I’d say Aerosmith and The Black Crowes.

What other writers or books (past and present) do you enjoy?

What’s your biggest gripe regarding the publishing industry? And, conversely, what do you like most about the current state of publishing?

Its cowardice. Its disruption and consequent elasticity.

How did you first get involved with Down and Out Books?

I met Eric at Noir Con in Philadelphia last year. Down And Out Books is a really visionary publisher.

What do you have coming up after WRONG CROWD?

My sequel to Apostle Rising is out next year and a sci-fi novel called Android Love, Human Skin. 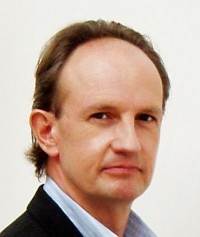 Richard Godwin is the author of critically acclaimed novels Apostle Rising, Mr. Glamour, One Lost Summer, Noir City, Meaningful Conversations, Confessions Of A Hit Man, and Paranoia And the Destiny Programme. He is also a published poet and a produced playwright. His stories have been published in over 34 anthologies, among them The Mammoth Book Of Best British Crime and The Mammoth Book Of Best British Mystery, alongside Lee Child, as well as his anthology of stories, Piquant: Tales Of The Mustard Man, published by Pulp Metal Fiction in February 2012.

Richard Godwin was born in London and obtained a BA and MA in English and American Literature from King’s College London, where he also lectured. You can find out more about him at his website, where you can also read his ‘Chin Wags At The Slaughterhouse,’ his highly popular and unusual interviews with other authors.

September 28 - October 4: "Must a thriller prompt fear in readers?"