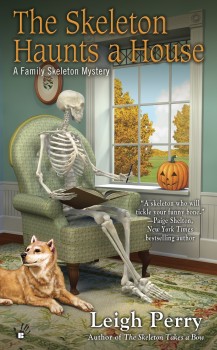 THE SKELETON HAUNTS A HOUSE is the third in the delightfully quirky Family Skeleton series featuring English professor Georgia Thackery who is a single mom with—literally—a skeleton in her family closet.

Leigh Perry (who also writes as Toni L.P. Kelner) answers some questions about her wisecracking living skeleton, Sid, and her new book.

How would you describe Sid to someone who loves your books but is afraid of skeletons?

Why would anybody be afraid of a skeleton? After all, we’re all skeletons under the skin.

Huh. I just Googled it and found yes, there are people who are afraid of skeletons. Some are actually afraid of their own skeletons. To those people I can say only that they should read another book. Sid is not a metaphor—he’s an actual human skeleton. If it helps, he is a clean skeleton—I’m not fond of nasty ones with bits and pieces still attached. But still, if you don’t like skeletons, this is just not the book for you.

Can you tell us something about THE SKELETON HAUNTS A HOUSE without giving too much away?

It’s Halloween in Pennycross, and Sid can’t wait to go into the town’s haunted house attraction. Then a dead body is found in the haunt—the real kind of dead, not the faux kind—and Sid and his BFF Georgia step in to catch a killer. Along the way, there are family complications, academic anxiety, carnival rides, and romance. (Not for Sid and Georgia. That would be icky.)

Sid dresses in costume again, but I don’t want to give away what he’s wearing.

You’re well known, as Toni L.P. Kelner, for your Laura Fleming series, other novels and short stories and editorial work. What prompted your creation of the the Skeleton series and ‘Leigh Perry’?

I wish I could remember just what I was thinking the day I came up with Sid. The best I can recollect is that I was in a career lull, and was thinking about what I could do with a paranormal detective series. My pal Charlaine Harris had the vampire market pretty well covered and my pal Dana Cameron was doing great with werewolves, so those two were out. Witches? Ghosts? Wizards? The fae? Angels? All had been done. A skeleton was all that was left! I typed up a few pages and did a little research, but that’s all for the next decade. Then I was pitching ideas to my editor, and Sid was the one she liked.

As for the “Leigh Perry” pen name, it’s pretty obvious where that comes from, since my full name is Toni Leigh Perry Kelner. (It’s that double-name thing of which Southerners are so fond.) The reason I went with a pen name was because it was a new series and a new direction, and a I wanted a fresh start on the shelves, too.

“Paranormal mystery” suggests something dark and frightening… but there is a cozy sitcom-Agatha Christie feel to your books. What are some inspirations for this world you’ve created?

I have to go off the bookshelves to name my inspirations. Sid owes more to Bewitched, I Dream of Jeannie, and The Ghost and Mrs. Muir than to any book. That being said, Berkeley Prime Crime publishes quite a few paranormal cozies, so I guess other people grew up watching those same shows.

Georgia Thackery and Sid the Skeleton have a lovely relationship, despite the awkwardness of keeping him secret. Do you wish you had a “Sid” in your life… or do your actually have one?

I would love a Sid, but honestly, there’s no room in my attic for one.

And Sid has some great lines! How do you come up with Sid’s wisecracks?

I confess to being a frequent punster and cracking wise is a frequent occurrence at our house. And that’s all of us—my husband, my daughters, and me—making jokes 24/7. The hard part is making sure I don’t go off on a joke-y tangent and lose the plot along the way.

What’s an ideal writing day like for you? And what’s a typical writing day? What’s on your desk now as you answer these questions?

I’m a night owl. So I’d sleep in, until 9 or 10. Then spend the day dealing with email, some promo stuff, playing computer games, and boring real-life stuff. Then, after the rest of the family had gone to bed, I’d hit the computer and write until 1 or 2 o’clock in the morning.

Do you mean literally what’s on my desk? Far too much junk. I’ve got a book about Italy to prep for my upcoming family trip, pills to pay, some skull bracelets to be used as giveaways for a contest or something, several skull toys and statues, a clay zombie my daughter made me for Mother’s Day a few years ago, issues of CrimeSpree and Mystery Scene to finish reading, and bills to pay. And a nifty electric pencil sharpener I adore despite almost never using a pencil. That’s the most visible stuff, anyway.

Have you always wanted to be a writer? If you ever had to choose between writing novels and mysteries which would you pick?

I first started dreaming of being a writer in junior high school, though most of what I worked on this was what would now be called fanfic. I got my first rejection slip—from Isaac Asimov’s Science Fiction Magazine—when I was in high school. So it’s a longtime obsession.

I’m honestly not sure about Georgia and Sid. Whether or not I get another contract for the series depends on the sales for The Skeleton Haunts a House. I do have a plan. If the series is picked up, Sid and Georgia will be heading to art school. In the meantime, I’m working on some ideas for another series, and I have some short stories I want to write. I’ve got some short stories that are out of print that I’ll be putting together in an e-collection or two. (As I write this, I’m just about ready to bring out my first e-collection: Crooked as a Dog’s Hind Leg.) And I really need to update my web sites.

Could you tell us where we can find you online? Will you be attending any upcoming events or mystery conventions?

I am online far too much of the day! I’m on Facebook under Toni L.P. Kelner, with fan pages for Toni L.P. Kelner and Leigh Perry. I’m on Twitter @Family_Skeleton and @tonilpkelner. And if that weren’t enough, I have two web sites: tonilpkelner.com and leighperryauthor.com and I blog every couple of weeks at femmesfatales.typepad.com.

Assuming I can tear myself away from the interwebs, I’ll be at Bouchercon in Raleigh, NC Oct. 8 through 11 and at the New England Crime Bake in Dedham, MA November 6 through 8. I may be doing some other traveling, but it’s all stuff in the fuzzy planning stage. 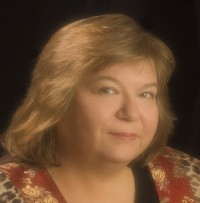 Leigh Perry as Toni L.P. in disguise, or perhaps vice versa. As Leigh, she writes the Family Skeleton mysteries. The Skeleton Haunts a House, the third, is due out in fall of 2015. As Toni, she’s the author of three “Where Are They Now?” mysteries and eight novels in the Laura Fleming series; an Agatha Award winner and multiple award nominee for short fiction; and the co-editor of urban fantasy anthologies with Charlaine Harris. Leigh and/or Toni lives just north of Boston with her husband, fellow author Stephen P. Kelner; their two daughters; two guinea pigs; and many many books.