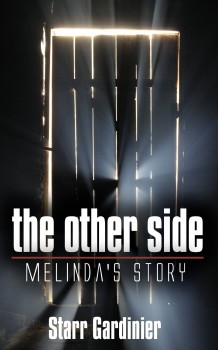 Melinda’s family is dead, killed for information that is hidden deep within her mind. Her father tries to warn her from the ‘Other Side’ that she is in danger from the killers who want what only she can give them. Committed to Skyview Haven, she must determine if the ‘Other Side’ truly exists or if it is a trick of her heart and mind. With time running out Melinda must determine who she can trust. Is it the ghosts of her family, a boy who may not be who he appears to be, or the doctor who is determined to cure her? Can she figure out the truth before it is too late?

“One of those rare paranormal thrillers that challenges as it entertains…a wondrous, chilling tale…supremely and masterfully crafted, and elegantly written…”
~Jon Land, author of Pandora’s Temple

THE OTHER SIDE is available from Amazon, Barnes & Noble and Kobo.

“Starr is a master with murder and mystery, she is both surprising and fantastic with the supernatural!
~Donald Allen Kirch, author of Reich

“A gripping tale where nothing is as it seems. Gardinier gives us a brand new twist to consider on how the dead interact with the living.”
~Aiden James, author of The Judas Chronicles series

“The suspense mounts, and you come to…layer your own suspicions and ideas one upon the other, until the…triumphant confrontation with the supernatural.”
~Kane Gilmour, bestselling author of Ragnarok

A paralegal by day, she’s an author by night. Apart from being an award winning author for her short story “Cut,” Reina has appeared in a blaze and made her mark on the literary world with her Ivanovich series and now her Other Side series.

Having studied and obtained her Bachelor’s Degree in Literature/Creative Writing, she has found her unique style and is known for her works’ distinctive voice, making every character stand out.

She’s the founder and owner of Editing by Starr Reina. She’s also an executive editor for Suspense Magazine. She has been interviewed in the newspaper and on the radio with relation to her fiction work. She has been a co-host on Suspense Radio.

Reina is a member of International Thriller Writers (ITW) and of Sisters in Crime, Los Angeles Chapter and nationally. She has won three Best Speaker awards as well as Best Evaluator at the Voice Ambassadors chapter of Toastmasters. She has always been active in events. As co-chair and main coordinator for the West Coast Author Premiere, she arranged the weekend-long event to help authors from all over network, learn and share their work with the public. Reina has also been instrumental in compiling authors and planning a local author event at Barnes and Noble in Ventura, California along with the store’s event manager.