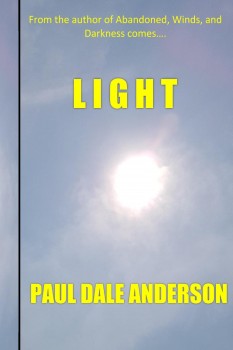 Bill Ramsey feels no different than before. He can see and hear and smell, but he can’t feel anything and he can’t move a muscle. Ramsey was sent on a secret mission to infiltrate a terrorist training camp in Pakistan, but he realizes he was killed before he completed his mission. There were signs, of course, that he was dead, but Bill didn’t want to acknowledge any of them. He saw the light at the end of the tunnel not as something friendly but as something fearful. He avoids going into the light each time he sees it, and he does see it again and again beckoning to him but he refuses to go anywhere near it until he completes his mission. Yet there is nowhere else he can go. He can only float a few feet in any direction from the place where he died. Ramsey needs to find a way to get a message to INSCOM, the Intelligence and Security Command headquarters at Fort Belvoir, Virginia. Terrorists plan to assassinate all of the world’s leaders, and Ramsey has no way to stop it from happening. When the spirit of Bodhisattva Vajrapani confirms Ramsey is dead and urges Ramsey to go into the light, Ramsey begs the former Army Ranger to help him complete his mission here on earth. Vajrapani teaches Ramsey how to transfer his consciousness into another body so Ramsey can deliver his message. Ramsey is able to enter the body of Randy Edwards because Edwards’ spirit left the body vulnerable to possession during the ecstasy of orgasm. Both minds and spirits now co-inhabit the same body. Ramsey-Edwards convinces Debra Johnson, an Army Intelligence Analyst at INSCOM, that the threat is real. When Deb is assassinated on the steps of the U. S. Capitol, all hell breaks loose. Can reincarnated wounded warriors stop an evil entity from controlling the world or will evil reign supreme?

LIGHT is available from Amazon.

Paul Dale Anderson has written more than 27 novels and hundreds of short stories, mostly in the thriller, mystery, horror, fantasy, and science fiction genres. Paul has also written contemporary romances and westerns. Paul is an Active Member of SFWA and HWA, and he was elected Vice President and Trustee of Horror Writers Association in 1987. He is a current member of International Thriller Writers, Author’s Guild, and a former Active Member of MWA. Paul is the author of Claw Hammer, Daddy’s Home, Pickaxe, Icepick, Meat Cleaver, Axes to Grind, Abandoned, Darkness, Winds, and Pinking Shears.