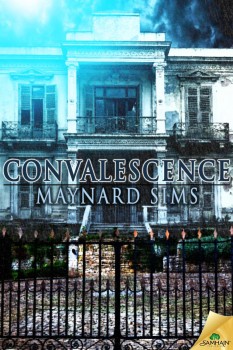 Who will protect the children?

Fourteen-year-old James has seen his family wiped out by tuberculosis in the England of the 1960s. When he is sent to the country to convalesce with his Uncle Thomas it seems a welcome respite. But his uncle is strange, and clearly has a dark secret. The huge house is secretive too, with whispers and cries in the night. Gradually James meets other children, some real, some apparently ghosts, but all of whom have been hurt by the uncle. Will James be next?

In an eerie novella of repressed depravity, Maynard Sims conjures nightmares from the fears of childhood.

“The author duo who comprise Maynard Sims are super-fantastic, one excellent story after another.” http://www.goodreads.com/review/show/1352649759?book_show_action=true&from_review_page=1

CONVALESCENCE is available from Amazon, Amazon UK and Samhain Publishing.

“Recommended for those who like mysterious, spooky tales.” http://readfulthingsblog.com/2015/09/05/convalescence-by-maynard-sims/

A Bahamas series of adventure novels – Touching The Sun, Calling Down The Lightning, and Raging Against The Storm, has been completed. A new crime series, featuring DCI Jack Callum, has been started, and the first novel written, Three Monkeys. Current work in progress includes the second Jack Callum novel, Encore, a new standalone crime thriller, a new Department 18 supernatural novel, a supernatural novella, and further romances.

They have written screenplays. One, based on the first two Department 18 books, won the 2013 British Horror Film Festival Award for Best New Screenplay.

Numerous stories have been published in a variety of anthologies and magazines. Collections include, Shadows At Midnight, 1979 and 1999 (revised and enlarged), Echoes Of Darkness, 2000, Incantations, 2002, two retrospective collections of their stories, essays and interviews, The Secret Geography Of Nightmare and Selling Dark Miracles, both 2002, Falling Into Heaven 2004, The Odd Ghosts, 2011, and Flame And Other Enigmatic Tales, and A Haunting Of Ghosts, both 2012. Their tenth collection of ghost stories and strange tales – Death’s Sweet Echo – which includes all their recent new stories, many of them unpublished, is published by Tickey Boo Press 2015.

Novellas, The Hidden Language Of Demons, The Seminar, and His Other Son have been published in 2002, 2003, and 2013 respectively. All their stories and novellas have been reprinted in eight uniform volumes through The Maynard Sims Library in 2014. A new novella from Samhain, Convalescence, a new romance from Siren, and The Curse Of The Mummy from Hersham are all 2015.

They worked as editors on the nine volumes of Darkness Rising anthologies. They co-edited and published F20 with The British Fantasy Society. As editors/publishers they ran Enigmatic Press in the UK, which produced Enigmatic Tales, and its sister titles. They have written essays. They still do commissioned editing projects, most recently Dead Water, and they are working on an anthology as editors for the ITW.. They do ghost writing commissions.