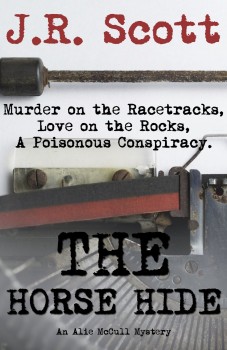 Death paid an unexpected visit. The brutal murder at a racetrack and two kidnapped thoroughbreds snarls Alie McCull in a web of lies, deceit, and half-truths. After poisoned horsemeat smuggled from Mexico makes people drop dead, the reporter wades into one part of a mystery she is determined to solve.

When Alie’s world is torn apart by the sting of infidelity and an old flame who might be covering up a gruesome secret, she knows one wrong move might be her last as she investigates the provocative conspiracy behind The Horse Hide.

THE HORSE HIDE is available from Amazon, Good Reads and Smashwords.

J.R. Scott grew up in St. Louis, Missouri and currently resides in Southern California. The former TV producer, independent film maker and stand-up comedian has written four books for die-hard mystery-thriller fans who love a pulse-pounding yarn with a roller coaster ride of tense action and suspense on a backdrop of 1950s nostalgia.