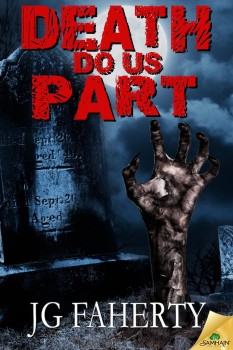 When Art Stanhope’s bitter, vindictive wife commits suicide, he believes all his troubles are over. Instead, they’re just beginning. For Catherine’s fury transcends even the grave, turning Art’s world into a living hell as he struggles to keep his son and new fiancée safe from her lust for vengeance.

But there are secrets behind Catherine’s death that Art doesn’t know—secrets that could prove deadly for everyone involved as they learn too late that death is not always a permanent condition, and sometimes the ultimate sacrifice can be too great a price to pay.

“I’ve known JG Faherty since he was an up-and-comer. Now he’s arrived. Start reading him now – as in TODAY – so you won’t have to play catch-up later.” – F. Paul Wilson, author of the bestselling
Repairman Jack series

DEATH DO US PART is available from Amazon and Samhain Publishing.

JG Faherty’s stories continue to astound, compel and challenge the parameters of imagination of even the most seasoned of readers. Forever flourishing and growing, Faherty’s prose, style and technique comes off as more polished, refined and gripping with each release.” – Dave Gammon, HorrorNews.net

A life-long resident of New York’s haunted Hudson Valley, JG Faherty has been a finalist for both the Bram Stoker Award® and ITW Thriller Award, and he is the author of six novels, eight novellas, and more than 50 short stories. He writes adult and YA dark fiction/sci-fi/fantasy, and his works range from quiet suspense to over-the-top comic gruesomeness. He enjoys urban exploring, photography, classic B-movies, good wine, and pumpkin beer. As a child, his favorite playground was a 17th-century cemetery, which many people feel explains a lot. You can follow him at www.twitter.com/jgfaherty, www.facebook.com/jgfaherty, www.jgfaherty.com, and http://jgfaherty-blog.blogspot.com/