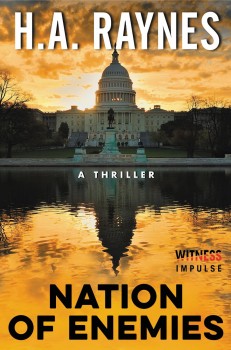 A chilling, suspenseful new thriller in the vein of Michael Crichton and James Rollins.

It’s all about the genetics. DNA. Black & white.

A decade ago the U.S. government mandated that all citizens be issued biochips containing all of their medical information and an I.D. number indicating a person’s health. Then they made the information public—the implications of which are wide-spread and devastating.

Now on the eve of the 2032 presidential election, the country is deeply divided and on the brink of civil war. But as the two major political parties face off, innocent Americans are dying at the hands of masked terrorists. When the Liberty Party’s presidential nominee is assassinated in a highly-coordinated, masterful attack, it sets off a chain of events that will change the course of history and leave America’s inalienable rights—life, liberty and the pursuit of happiness—dangling on the precipice of extinction.

NATION OF ENEMIES is available from Amazon, Barnes & Noble and iTunes.

***Sometimes the comfort of reading fiction is knowing that it is not real. Sometimes that comfort comes as escapism from a fantasy story; sometimes it’s relief from a horror story; or empathy and compassion from a love story. We take comfort in the pretend. It is what we need to balance out the reality of everyday living.
But when a piece of fiction depicts such a plausible near future — and a dark, dystopian one at that — it is truly chilling. That’s what HA Raynes has done here. The sheer real-world plausibility of the plot of Nation of Enemies is what makes it riveting. And terrifying.

It’s set in the near future but it is a thriller, not a science-fiction story. Even though the setting of N.O.E. is the run up to the Presidential election of 2032, everything about this story feels like it could feasibly happen 17 years from now. The MedID technology. The prevalence of fundamentalist cults. Abhorrent terrorist acts. The power of the healthcare industry. Abuses of digital privacy. Abuses of political power. If those injustices aren’t already happening today…

At the same time, the characters are still humans. Not just humans, but human. They are relatable with ample flaws to accompany their strengths. The future setting doesn’t break the chain of their relate-ability.
It’s a quick engrossing read that ends up being a think piece about politics, privacy, family and fear and the role technology can (and will) play in all of these topics. Especially poignant in light of the 2016 elections.

***Raynes is a rare writer—a gifted storyteller of heart-pounding action who pens crystal-clean prose and complex characters. Nation of Enemies is a page-turner—make no mistake about it. I couldn’t put it down, and I found myself reading as fast as possible to find out what happens next. But there were also other moments when I found myself pausing to admire how Raynes crafts scenes and shifts between multiple narrators without pausing in tempo, action, or continuity.

The novel starts out with a bang: it grabs you and won’t let you go. Set in a near future-world in Boston where civil war has created a war-torn landscape, the novel alternates between the points of view of various characters whose lives are forever marred by violence and who try to bring down a terrorist group headed by a criminal mastermind. The book moves at breakneck speed, all the while going deep into the characters’ lives and making you think about the deeper issues of national safety and individual freedom—and what can happen when the best-laid intentions and ideas are sabotaged by fanatics and saboteurs.

Nation of Enemies is a timely novel about terrorism, technological invention, and the breakdown of government systems. It’s also a good-old-fashioned terrific read. Raynes is a novelist to watch out for.

H.A. Raynes was inspired to write Nation of Enemies by a family member who was a Titanic survivor and another who escaped Poland in World War II. Combining lessons from the past with a healthy fear of the modern landscape, this novel was born. A longtime member of Boston’s writing community, H.A. Raynes has a history of trying anything once (acting, diving out of a plane, white water rafting, and parenting). Writing and raising children seem to have stuck.