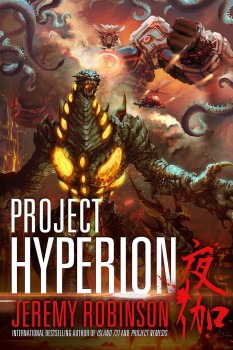 THE SIGNAL WAS RECEIVED

Jon Hudson has become more than just the director of the Department of Homeland Security’s Fusion Center–Paranormal. He is now a husband and a father, surrounded by a team who have become a family. So when a series of strange new threats rise from the depths and fall from the sky, the stakes are higher than ever.

While Maigo, the young woman who was once a part of the kaiju known as Nemesis, goddess of vengeance, and Lilly, a chimera cat-woman, sneak off to investigate Big Diomede, an island with an ancient secret inside Russian territory, two monsters fall from the sky. One heads for Tokyo, the other for the already battered Boston. Tsunamis rise from the depths, leveling cities. The two new kaiju—Giger and Lovecraft—follow close behind, bringing death and destruction with them. And Hudson realizes the horrible truth: the Aeros, an alien race plotting mankind’s destruction, have sent these kaiju in advance.

Drawn by the chaos, and by her connection to people she and her new ‘voice,’ Katsu Endo, are fond of, Nemesis rises to the defense of humanity. But the Queen of the Monsters is not alone. Maigo and Lilly unleash an ancient protector known as Hyperion, and the first battle for the fate of the human race, in all dimensions, begins.

With the first three Nemesis novels, Jeremy Robinson created a new literary subgenre known as the ‘Kaiju Thriller,’ a term now being adopted by other authors. And like all good Kaiju, Nemesis is growing to epic proportions, spawning a video game, The Fall of Nemesis – Colossal Kaiju Combat, and a comic book series titled Project Nemesis, with art by Matt Frank, and published by American Gothic Press, a new imprint of Famous Monsters of Filmland.

With Project Hyperion, Robinson introduces two new kaiju and his first giant robot. You’ll witness the demise of Nemesis Prime, and the kick off of events that will lead to the fifth Nemesis novel.

PROJECT HYPERION is available from Amazon, Barnes & Noble and Kobo.

“A must. Jeremy Robinson just keeps getting better with every new adventure and monster he creates.”
—Suspense Magazine

“Reading Jeremy Robinson is dangerous for your sleep pattern. He spins monster yarns so well that you cannot stop turning pages. Giant monsters, creepy islands and writing that is both smart and furious in intensity and pace.”
— Famous Monsters of Filmland

His series of Jack Sigler / Chess Team thrillers, starting with Pulse, is in development as a film series, helmed by Jabbar Raisani, who earned an Emmy Award for his design work on HBO’s Game of Thrones. Robinson’s original kaiju character, Nemesis, is also being adapted into a comic book through publisher American Gothic Press in association with Famous Monsters of Filmland, with artwork and covers by renowned Godzilla artists Matt Frank and Bob Eggleton.