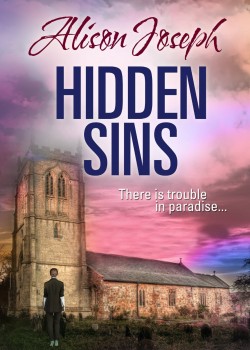 It is a novella featuring Agatha Christie as a detective, the second in the series (the first was Murder Will Out).

It is June, 1925. Agatha Christie is holidaying in Cornwall and working on a new novel, a romance. But her plans are interrupted when one of the guests is found shot dead on the hotel tennis courts. Frederick Collyer was researching the life of a local man, an eminent chemist who worked on camouflage. As Agatha is drawn into the investigation, it becomes clear that the killing has its roots in the Great War, and the truth is obscured by the shadows it still casts.

HIDDEN SINS is available from Amazon and Amazon UK.

ALISON JOSEPH is a London-based crime writer and radio dramatist. After a career in television documentaries, she began writing full-time with the first of the Sister Agnes series of crime novels. Sister Agnes is a contemporary, detective nun working in a homeless hostel in South London. The most recent, A Violent Act, is about fathers, daughters and creationism. Alison has also embarked on a new police series, featuring Detective Inspector Berenice Killick and set in Kent. The first, called Dying to Know, is all about particle physics. Her latest series features Agatha Christie as a detective. The first, Murder Will Out, was published in December 2014, and the second, Hidden Sins is published September 2015. Alison was Chair of the British Crime Writers Association from 2013 to 2015.