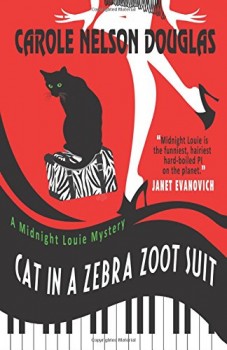 Now out in eBook, trade paperback, and audiobook

“Just about everything you might want in a mystery: glitzy Las Vegas, real characters, suspense, a tough puzzle, and…on top of it all, a fine sense of humor and some illuminating social commentary.”—The Prime Suspect

Readers are biting their nails as the popular alphabetic Midnight Louie feline PI mystery series’ penultimate book arrives with this 27th entry. Even then, Las Vegas’s hairiest sleuth (whose feline-noir voice has been compared to Hammett, Hammer, and Nathan Detroit) will not be hanging up his fedora. Cat in an Alphabet Endgame is still to come.

In the 27th and penultimate Midnight Louie mystery by New York Times Notable Book of the Year author Carole Nelson Douglas, Midnight Louie channels the jazz and swing-dance age of integration on the Las Vegas Strip. In Cat in a Zebra Zoot suit, Circle Ritz residents petite PR powerhouse Temple Barr and her faithful roommate, Midnight Louie, must defend a beloved friend from a murder charge that echoes a long-past atrocity. Meanwhile Temple’s fiancé, Matt Devine, turns detective on a secret mission with vintage mobsters and her ex, a magician with a counter-terrorist past, tangles with vengeful IRA members and a psycho stalker in Ireland. The main question: what makes a defunct fifties nightclub building in Las Vegas the pit of all evil and greed?

All the main characters will face surprising dangers and choices and balance on the edge of survival . . . and perhaps shocking new futures. Deadly encounters and unexpected reunions force them all into unforeseen loss and disclosure, the suspense leavened by Douglas’s characteristic wit and heart.

CAT IN A ZEBRA ZOOT SUIT is available from Amazon, iTunes and Kobo.

“Midnight Louie is the funniest, hairiest, hard-boiled PI on the planet!”–Janet Evanovich

“Glitters and snaps like the town that inspired it.”–J.D.Robb/Nora Roberts

“The thirteenth mystery in the Midnight Louie series [is] a substantial read of 384 pages, chock full of multiple story lines. Readers can expect to get their money’s worth.The mystery is strong, sensitive, humorous in parts, and very enlightening. The characters are full-bodied and revealing like no others I have read. I see the Midnight Louie series as a continuing epic of ongoing storylines with a new mystery creatively added in each installment. But not to worry. Ms Douglas gives a detailed update at the beginning of the book.” —Mystery News

“Although Runyonesque street-cat Midnight Louie tracks a feline in his 12th appearance, he and feminine amateur sleuth Temple Barr, the cozy-noir partners who launched the Douglas series, take a backseat on this ride through Oz Vegas. Surrealistic in any case, Las Vegas goes nova when [it hosts] TitanicCon, the biggest science ficition/fantasy convention ever. When the daughter of working mom and tough cop Carmen Molina is desperate to go, Molina needs help from all the regulars in this jam-packed, postmodern-Dickensian series . . Character confusions proliferate in this masked world where the “real” Khatlord look exactly like costumed fans . . . When UNLV Professor Jefferson Mengel is sliced a by a real replica of a prop knife, the case enters another, more dangerous,, dimension, bursting the bounds of a single book and single genre. If Midnight Louie prowled only the predictable streets of genre fiction, all the murders in his ersatz world would be resolved. But each new installment in this exuberant series compounds the complexity, leaving us between books with mysterious bodies and looming menace.” –-Kirkus Reviews on Cat in a Kiwi Con

She’s a four-time Rita Award finalist and has RT Reviews Magazine lifetime achievement awards in Suspense, Mystery, and as a Pioneer of Publishing. She currently writes the popular Las Vegas-set Midnight Louie, feline PI, mysteries, partially narrated by a “Sam Spade with hairballs” who’s been compared to Hammer, Hammett, and Nathan Detroit, and the Delilah Street, Paranormal Investigator, noir urban fantasies of werewolf mobsters and Silver Screen zombies in a paranormal Sin City.

Douglas was the first woman author to spin off a Sherlockian series and to feature a female protagonist from the Canon: American opera singer-detective Irene Alder, the only woman to outwit Holmes, debuting with the New York Times Notable Book of the Year, Good Night, Mr. Holmes. Adler also features in the only novels to feature three women tracking Jack the Ripper, Chapel Noir and Castle Rogue, which propose a totally new suspect for the Ripper.