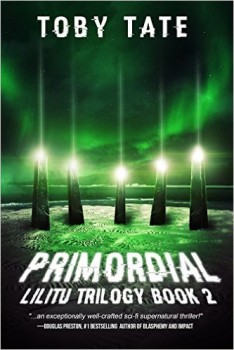 When towering black obelisks start appearing around the Mediterranean, CIA operative Gabrielle Lincoln begins to question their presence, believing them to be far more ominous than simple country tributes. But if she’s right, humanity is about to be plunged into a living nightmare.

PRIMORDIAL is the second book in Toby Tate’s Lilitu series, and a continuation of his thrilling novel, Lilith. Tate took some time out of his schedule to talk to The Big Thrill this month about his latest release, including what about the sci-fi genre piques his interest and the exciting project he’s working on next.

Did you have a favorite character to write?

I think my favorite character would have to be CIA Operative Gabrielle “Gabe” Lincoln. She was born in the U.S. and raised by her parents in Australia. She came back to the U.S. to go to college and join the Air Force as an intelligence officer. She later joins the CIA as one of their best clandestine field operatives. She’s quite lethal, but has a soft side, as well. Two things that make her stand out are: a big red dragon tattoo across one shoulder, and her ten-inch, neon-green Zombie War Sword.

Why sci-fi? What got you interested in the genre?

I grew up reading Ray Bradbury and Edgar Rice Burroughs. Stories like The Martian Chronicles and John Carter of Mars just pulled me in and opened my imagination to new worlds. I’ve never read anyone yet who could mold the English language the way Bradbury could. He will always be the master storyteller.

Although there’s a lot of globe-hopping, my stories are all set on Earth. I do it that way because it’s more relatable to the reader to have things they are familiar with. Otherwise it just gets so far out that it’s easy to lose interest. But there are some bizarre creatures called Lilitu, which I think people will find fascinating. They start out as human, but when they come into contact with radiation, they mutate into these huge, vicious beasts.

I spent months trying to put together a sequel to Lilith, and this was the result. I wanted to write something that would give more information about the origin of the Lilitu. But mainly it came from my interest in science and mythology. Of course now it’s been edited by several people and in the interim I also wrote The Lilitu, which acts as a sort of tie-in.

Where do you look for inspiration?

Things that happen in everyday life are pretty inspirational for me, especially in the scientific community. For instance, the other day I was reading a story about a guy at the University of Nebraska who invented an actual warp drive that would allow spacecraft to travel faster than light, but without actually moving. That kind of stuff makes a great basis for a story. I’m constantly reading about new inventions or ideas, about strange happenings, unusual life forms, unexplained phenomena, the mythologies and theologies of other cultures―it all goes into my brain, gets mixed together, and eventually comes out on paper somewhere along the line.

Besides spending time with my family, I love to read. It’s my favorite thing without a doubt. But I’ve been a musician my whole life. My four main instruments are drums, bass, guitar and vocals. I play with several bands, everything from rock and R&B to country and bluegrass. I also write my own songs, which I’ve been doing for years. I’ve put out several CDs, which you can find on my website. I do my own recording, too.

I’m currently working with my agent on a new book series. It’s about a young detective named Shaun Patrick who gets transplanted from Charlotte, NC, to Washington, DC to head up their new Occult Crime Squad. His first big case has him chasing after a serial killer who is murdering Chinese gang members. Shaun comes to believe that ancient Chinese black magic is being used to raise the dead to commit murder. It’s a lot of fun, but hard work, since I’ve never written crime thrillers. They’re a bit different from what I’m used to. 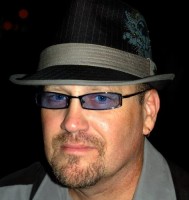