The Boundless World of Jack Reacher 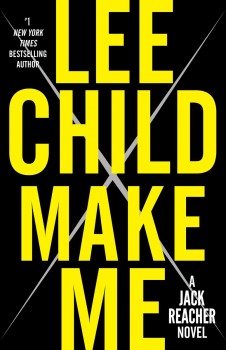 A TRAIN STOPS at night next to “a grain elevator as big as an apartment house,” and a single man gets out. “There was mist in the nighttime air like a note on a calendar.” A woman emerges from the shadows, eager to speak to him, until she realizes he’s not whom she was expecting, and her disappoint shows.

So begins MAKE ME, the twentieth novel written by Lee Child featuring Jack Reacher, a former major in the U.S. Army Military Police  who now wanders America alone. Something always happens, and Reacher is, in his creator’s words, “in deep shit for the rest of the book.” Or to put it another way:  “He’s always in the wrong place at the wrong time.” MAKE ME, which made its debut on The New York Times hardcover fiction bestseller list at Number One, is “pretty hard core even for a Reacher book,” said Child at a tour stop at Barnes & Noble in Manhattan’s Union Square. The twists are truly shocking. “I have a big surprise and then I have a bigger surprise,” the author said with a smile. To prevent spoilers, no more can be said on the plot of MAKE ME.

No less a fan than Malcolm Gladwell, in the pages of The New Yorker, described the appeal of Reacher’s “lawless pleasures”: “We know going in that Reacher will kill the bad guy through some combination of tactical brilliance and brute force. The pleasure is in Reacher’s moment of introspection in the millisecond before the action occurs: his silent consideration of the variables of physics, geometry, and psychology that comprise a violent encounter.”

In an interview with The Big Thrill, Lee Child opens up about his creation, Jack Reacher, and the craft of writing.

The first question from the audience at your Barnes & Noble event in September was about Tom Cruise playing Reacher, and later you were asked about another film being adapted from a Reacher novel. It seems that people frequently want to ask authors about film possibilities.

Yes, and you know I don’t care who plays Jack Reacher. The books are my thing. I don’t like the presumption that the books are not enough. In this view, it’s as if a book is a chrysalis yearning to be a movie. But for me, the book is the final product.

And of course authors have to accept the realities of adaptation.

I love Hollywood people, I like the movies. But if you’re going to turn a book into a movie, it will change a lot. A book has ten times the content of the movie.

Your novels are so very visual, they have a filmic quality, that could be bringing this about. The geography of the Reacher books is critical. What drew you to these remote towns, these wide open spaces?

Well I come from Europe, where we have places that are radically different 30 miles apart. And when I was driving through West Texas, I could go 80 miles without seeing a physical structure. I met a woman who said that she could not eat anything that she didn’t grow herself or shoot herself without needing to drive five hours to buy it. I loved that. 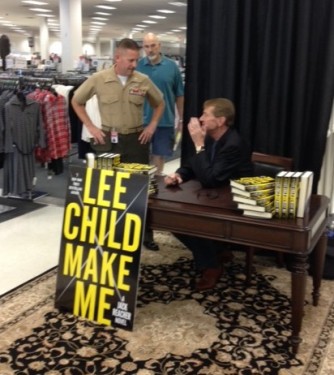 Child signing books at an event in Quantico.

You have such a feel for these places. They are in the DNA of the novels. When you were first creating the character of Jack Reacher, what was your process of deciding to put him these remote areas?

It’s not a question of wanting to put him there. He has to be there.

In MAKE ME, I feel that Jack Reacher is pushed harder, physically and mentally, than he has been before.

I read a quote from you: “The first draft is the only draft.” I thought that was very interesting. So  you write instinctually and you stick with it?

Yes. Every morning I check what I did yesterday. I go over it for style and flow and so on. But as far as the story is concerned, that is the story. The way I see it, the first draft, that’s what happened. And you can’t alter that later.

The opening of MAKE ME very quickly sets the whole plot in motion, but it’s also dreamlike. I can see that writing such as that would be hard to tear apart and do over.

Right. You can’t start messing with things, otherwise you do break that mood.

Reacher has such a strong voice, and he has possessed it throughout the entire series. But he must have changed some. Have you noticed changes as you’ve written him?

A main appeal of the series is the comfort of it and the familiarity. The reader is welcomed back into a world they already know and love. You want to keep that consistent. I try very hard to not change him. The world changes, I change, I get older. The years go by. So yeah, I think he does change somewhat, but as little as possible. That keeps it organic. It’s not me changing him because of some sort of theory. He only changes when the world of the author changes.

And yet I felt in MAKE ME that Reacher by the end has changed. He’s more vulnerable. He’s been damaged more perhaps.

He’s exposed in this one to things he’s not normally exposed to.  Reacher needs to win, but he also needs to make the other guy know that he lost. It’s a crucial component. Because of what happens in this book, he can defeat the people in front of him, he can win the battle, but he’ll never win the war. I think it leaves him a little disconcerted.

You’ve said that it’s very important that Reacher is alone in the world. But I felt that in this book, the investigator Michelle Chang, former FBI agent, and Reacher had a real relationship, a significant connection.

I really liked Michelle and Reacher did too. She was strong. She had also had some things go wrong  with her. She was down on her luck. She was pathetic, but not in a bad way. She’s not working for a glamorous investigative agency any more.  That is what Reacher responded to.  She’s far from a helpless person but she is put in a situation in which she needs help. There has to be a trigger for him to react to. And I like that she was fortyish and a bit hefty. 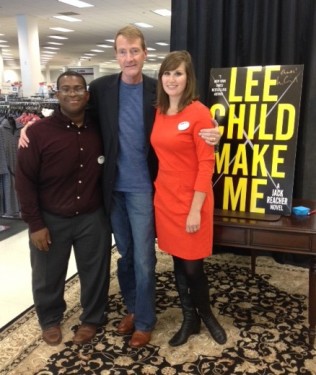 Child’s book tour covered the U.S. and the U.K.

Your books have some of the tensest, most terrifying passages of any thriller. I was so affected by Killing Floor, particularly the chapter in which Reacher is in what he thinks is a minimum-security weekend prison but is actually maximum-security. He’s been set up to be killed. The other inmates are determined to tear him to pieces. How do you get to such a frightening, dark place in your writing? Is the writing fun?

I guess it is. I certainly have fun while I’m writing it. But I agree it is pretty frightening and pretty horrific, a lot of it. I do wonder, Where does this come from? I guess it is good for a writer to work it out that way rather than let it fester in your mind.

I’ve heard you speak a number of times. People say you are Reacher. But your humor and manner are different than Reacher’s. Different speech patterns, reactions, and obviously back story. How do you create such a strong, consistent voice that is so not like you?

People say that, “Why isn’t Reacher funnier?” I avoid the wisecracking thriller hero, who has been done to death. But I do think Reacher is funnier than people give him credit for. He has a dry, sardonic sort of humor.  His life is serious, so he’s a very serious guy.

His own thoughts about the people he encounters, especially if they are jerks, are very funny.

He’s got absolutely no social niceties or inhibitions or anything like that, no sort of social preconceptions. He looks at people objectively. And of course if any of us do that, it is pretty funny.

Andy Martin, a Cambridge academic, literally watched you write MAKE ME in order to write his own book about your process.  What was it like to have someone watch you work?

There was some pressure. But on behalf of all of us, we work really, really hard with a tremendous amount of skill I think, and yet that part of it is rarely acknowledged. I felt it was interesting that this academic guy was actually prepared to view it as a craft. I did it partly an experiment—this is the twentieth book and let’s do something different. And also I did it on behalf of everyone. So the world knows we actually do think about it very hard and apply a lot of skill and craft.

Did you ever forget he was there?

Sometimes. And in some ways it was interesting, because I’m someone who’s obsessed with words and their meanings. It was nice to have someone to talk about it with. 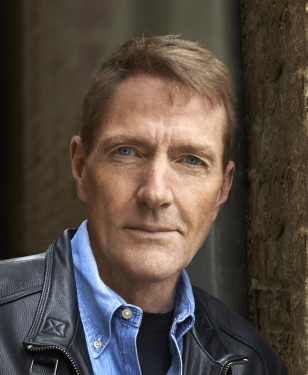 Lee Child is one of the world’s leading thriller writers. His novels consistently achieve the number one slot in hardback and paperback on bestsellers lists on both sides of the Atlantic, and are translated into over forty languages. All have been optioned for major motion pictures, the first of which, Jack Reacher, was based on the novel One Shot. He was awarded the Crime Writers Association Diamond Dagger in 2013. Born in Coventry, he now lives in America.