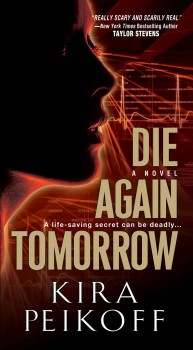 Kira Peikoff’s novels, such as No Time to Die and Living Proof, deliver a blend of cutting-edge science, deeply human characters, and explosive high-stakes controversies—and she doesn’t disappoint with her newest bio-medical thriller, DIE AGAIN TOMORROW .

In DIE AGAIN TOMORROW, Isabel Leon, the star of a survival reality show, thinks she can endure anything. But when she unwittingly gives an unscrupulous mogul a chance to profit from her murder, she becomes the target of a terrifying killer. At first left for dead, she awakens to find she’s the living proof of a breakthrough that can change the world. Some people would pay any price to control it. Others would simply steal the secret—even if it costs Isabel’s life. As powerful rivals pursue her, Isabel must risk everything to protect those she loves—or die again tomorrow.

Kirkus Reviews says, “Peikoff shows a deep understanding of the issues she explores,” and Mystery Scene Magazine hails her as creating “believable, well-rounded characters who represent both sides of a tough moral question.”

As a journalist, Kira covered street crime for The Daily News, Capitol Hill for The Orange County Register in Washington, D.C., business and technology for Newsday, and researched feature stories for New York magazine. With a master’s degree in bioethics Kira has clearly mastered how to twist potential science technology into scarily real thrillers.

DIE AGAIN TOMORROW is your third novel. Why this particular story for your third book, and how does it differ from your previous novels No Time to Die and Living Proof?

In graduate school studying for my bioethics degree, one of the hot topics we often discussed was death—how to define it, whether it’s possible to reverse it, and what moral dilemmas new technology is introducing by creating grey areas around the very permanence of death. In today’s era, someone who suffers a cardiac arrest can be pulseless and fit the criteria of “death”—no heartbeat, no respiration, no brainwaves—but still be resuscitated after minutes or hours via the proper technology and survive intact. This was a huge surprise for me, and one I felt would be exciting to explore in a thriller. DIE AGAIN TOMORROW differs from my other books in that the identity of the villain is a surprise, and there are more twists and turns than I’ve ever written before. I had a lot of fun with pacing and misdirection.

Was DIE AGAIN TOMORROW inspired by any true events or special cases?

In particular, yes, I interviewed a man who collapsed after a cardiac arrest and was pulseless –what we used to call “dead” in the old days—for a period of three to four hours altogether. But he received the highest quality of emergency care during this time, with therapeutic hypothermia, chest compressions, etc., and the doctors didn’t give up on him because he was the husband of a nurse. They finally got his heart back, and his brain survived because of the cooling measures. He has run triathlons every year since then.

Even with your knowledge and background related to DIE AGAIN TOMORROW, did you find that you still had to conduct research to write it? And did your research have any particular influences on the plot or characters?

Lots of research! This included sitting down with the head of Resuscitation Research at Stony Brook Hospital and taking a tour of the ER and its equipment. It absolutely influenced the plot, by helping me figure out what liberties I could take while still sounding realistic. The whole first chapter was a collaborative effort between me and the emergency doctor who was my main resource—he helped immensely in explaining how to resuscitate a drowned woman and what measures might be taken if our current technology was just a bit more sophisticated.

Your work has been compared to Michael Crichton. Would readers say there is a Kira Peikoff writing style they can count on? What would that be?

I hope they would say my writing is vivid, cuts to the drama, and doesn’t let up.

Your first two books, No Time to Die and Living Proof, feature the main characters of a student and doctor respectively.  Your lead character in DIE AGAIN TOMORROW, Isabel Leon, is the star of a survival reality show. What inspired this unusual role for Isabel?

I liked the irony of a character who thinks she can survive anything, but is unprepared for surviving her own death. I also played with the theme of survival more broadly—the differences between surviving in the wild, with nature as your enemy, vs. surviving human evil, the latter being infinitely more dangerous.

In your thrillers you pose hot bio-ethical questions such as: Should the government control medical research? Who owns your body? How far should medical research operate outside the law to save lives? Is it hard to remain objective and present both sides of tough moral questions when writing this kind of fiction without imposing your own beliefs in the story?

I don’t think objectivity is the goal in fiction, unlike in journalism. With a novel, you’re presenting a stylized world in which characters who hold certain moral values prevail over others, revealing the author’s own sympathies. It’s pretty obvious from my fiction that I am extremely pro-research and have grave misgivings about the government controlling science. If readers come to understand this viewpoint, even if they don’t agree with it, I feel I’ve done my job on a deeper level than simply entertaining. I strongly believe that fiction is one of the most effective ways to communicate a thematic cultural message, even more so than non-fiction.

As a journalist, you’ve covered street crime, business, and technology for major news outlets. Do you ever find yourself cataloguing details in your head to write later as you investigate real-life stories?

Absolutely. Studying journalism trained me to observe detail and nuance in a way that’s critical for fiction.

With writing bio-medical thrillers, how do you strike an ideal balance between explaining the science while also focusing on character and story development to keep readers captivated?

I know readers are in it for the story, just like I am. They aren’t reading my books for a scientific treatise; they want just enough detail so they can suspend disbelief. I let that instinct be my guide.

Your books dive deep into moral dilemmas of bio-medical research and potentially terrifying technological advances in science. With a master’s degree in bioethics, you have an insider’s look into this veiled world. Could the situations in your books actually happen and how do you tackle the challenge of making such possibilities believable?

The challenges in each of my books are always rooted in real-life technology and research, so the situations are hypothetically possible in the near-future. I like to take what we know now and stretch it just enough to cause serious drama. I couldn’t do this without the amazingly knowledgeable and helpful scientists I have collaborated with to make my ideas believable.

Have the life of a journalist and thriller author ever collided in strange ways?

I don’t know about strange, but being a journalist is the best way I know to get ideas for fiction!

What’s up next for you in the world of bio-medical thrillers?

Too early to share just yet, but I’ve got something big up my sleeve. Stay tuned! 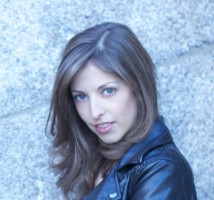 Kira Peikoff’s previous novel was the acclaimed No Time to Die. As a journalist, Kira covered street crime for The Daily News, Capitol Hill for The Orange County Register in Washington, D.C., business and technology for Newsday, and researched feature stories for New York magazine. She freelances for a variety of major media outlets, and attends Columbia University’s Master of Science program in Bioethics. She lives in New York City with her husband and dog.

To learn more about Kira, please visit her website.